In 1993 the iconic Dunes hotel was demolished.

It had played host to many legendary acts, from Liberace to Frank Sinatra, and anywhere else would be preserved as a historical landmark.

Instead, the destruction was a choreographed spectacle involving cannonballs, fireworks and 400 gallons of jet fuel.

This was the template for further demolitions as the old Vegas made way for ever increasing expansion: more hotels, more casinos, a bubble that seemed like it would never burst.

The city perpetually erased its history and demolished its culture to make way for the profit-making stimulations and simulations of the strip.

But has that now changed as consumers have grown to expect a more rounded experience, and as non-gaming revenue exceeds profits from casinos?

Everyone thinks they know what Las Vegas is.

A simulacrum, a playground, a soulless cultural desert in the desert.

Sometimes it can feel like one of the industrial entertainment complexes you find anywhere – all chain bars and fibreglass and shopping mall lighting, artificial everything.

At worst, parts of the city have that end-of-the-pier gaudy feeling.

But at its best the city is an exhilarating, intoxicating bubble, a 24-hour suspended reality outside of time: smoke and mirrors and camp spectacle.

Vegas has its own giddy, euphoric culture - offering something you can’t find anywhere else.

A change seemed to come about more recently as developments such as Las Vegas Plaza and Echelon Place were complete; vintage hotels were demolished but replacement buildings were struggling to get of the ground.

The Harmon hotel – a $400million Norman Foster designed non-gaming boutique hotel was named ‘most expensive billboard’ after being condemned for a building fault before even opening.

No gung-ho explosions could happen because of its location and the building was quietly dismantled piece by piece just a few years after construction began.

Could these more subdued events be seen as a catalyst for change in the destination, to developing more thoughtfully, and offering more of a variety for the customer?

Downtown Las Vegas has seen a resurgence in recent years

MGM Resorts International, among the world’s leading entertainment companies and a big presence in Vegas, founded MGM Resorts Art & Culture, the company’s multifaceted arts program, in 2016, working on bringing more cultural experiences to their resorts and to the strip.

Tarissa Tiberti, executive director of MGM Resorts Art & Culture, explains: “As the leading entertainment company, we continually strive to find incredible experiences that are unique to MGM Resorts and our customers.

“Having a world-class art collection is one of those unique experiences.”

MGM also invests in events such as Art Basel and have made it a policy for all new developments to contain artworks.

So what is the strategy here?

Is it just paying lip-service to culture as another aspect of a ‘luxury’ offering?

Is this part of a global trend whereby destinations seek to expand their cultural cachet – such as the Louvre recently opened in the United Arab Emirates.

MGM’s efforts seem well considered, with schemes for local artists and thought given to how investment benefits the community as well as visitors.

As Tiberti adds: “Investing in the arts and culture brings a richness to the city.

“This benefits both the residents and the visitors, providing beautiful and thought provoking opportunities to start conversations and create an exploration.”

Much investment has happened in the previously neglected and rundown Downtown area, which retains the feel of the old Vegas (and is indeed the original strip).

This area contains the more hip, revitalised culture away from the corporate monoliths: independent restaurants and bars, start-ups and smaller casinos you’ll find the locals frequenting. 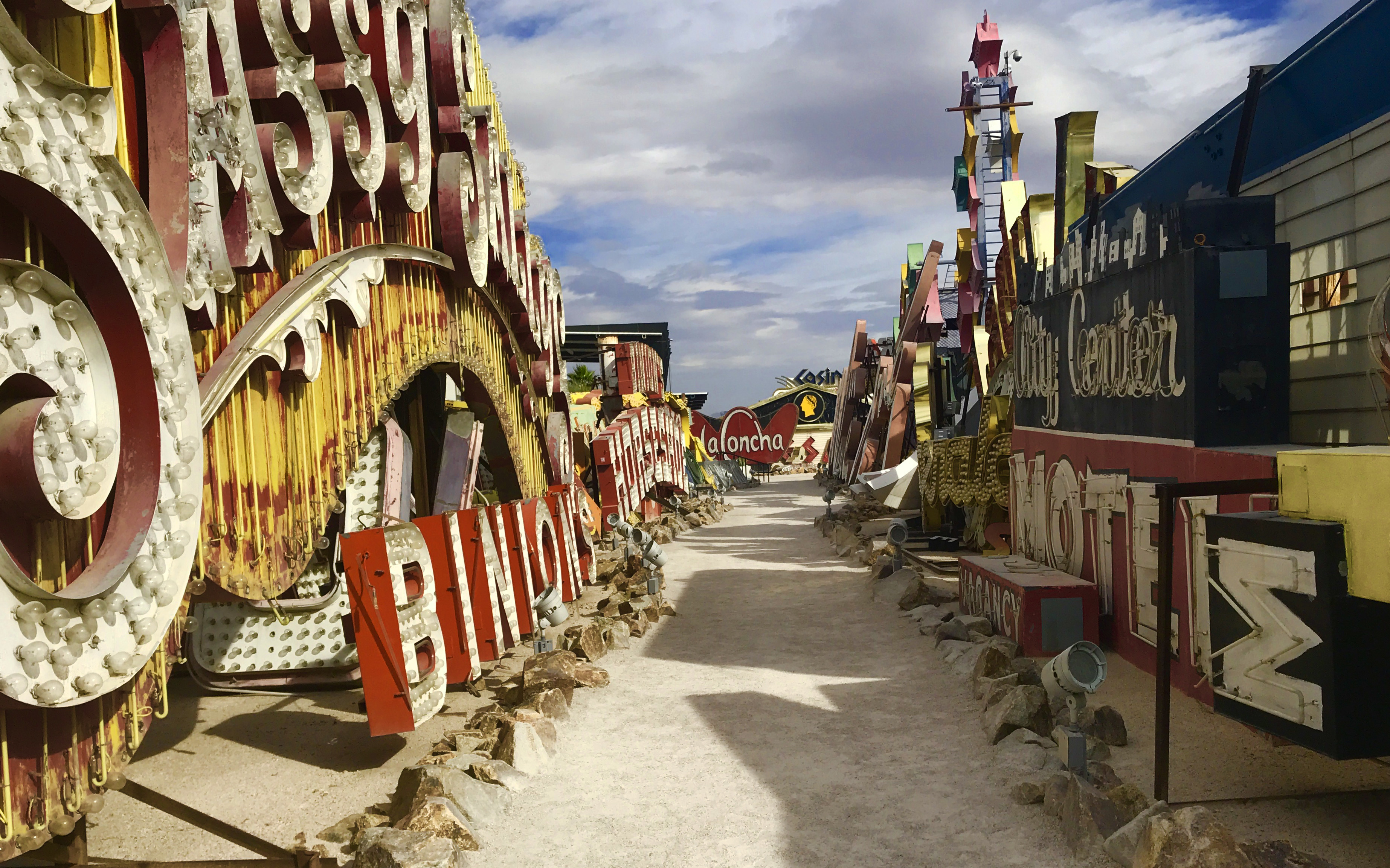 The Neon Boneyard offers a glimpse into Las Vegas’ past

All that’s left of many of those exploded iconic hotels is a few vintage signs – now carefully preserved by the Neon museum, in the Neon Boneyard in the city’s cultural corridor.

Here you find an outdoor museum of signs and typography from the 1930s onwards that were left to rust until the museum began to preserve and display them, telling the story of the city and the people who made it.

They also restore historic neon signs and replace them in situ, which you can see around the strip and downtown.

This is part of a wider investment in the area with initiatives such as the Downtown Project and the Downtown Container Park, a development of shipping containers that contains specialist shops, cafes and live entertainment.

This format, along with the street art which you see downtown, has become a bit of a cliché of hipster gentrification - instant urban authenticity.

It would be a shame if the kitsch gaudy glamour of Vegas was erased by bland international ‘good taste’.

However, it is it is developments like this that are transforming the downtown area from a no-go zone to a vibrant cultural hub.

The Seven Magic Mountains sculpture on the outskirts of Las Vegas

This large-scale, site-specific piece is a monumental eruption of neon painted stone monoliths in the middle of the wilderness.

It captures the human and artificial essence of Vegas alongside a mysterious sense of timelessness and permanence.

Not only that but the piece was part of a discussion on visual arts across the state which culminated in the exhibition Tilting the Basin, which celebrated work by local artists.

Culture is not only present in highbrow high arts, and Vegas has its own uniqueness and vitality that it is now finally trying to preserve.

It can only make economic sense to have varied experiences outside the monoculture of casinos, developing local businesses and giving the destination a local richness for the bigger corporations to celebrate.

Tellingly, MGM’s newest $450million transformation of the Monte Carlo to Park MGM for 2018 is a refurbishment rather than a demolition, with a piece of original artwork in every room.

Perhaps this heralds a change for the city and for developments that will embrace the history and legacy of Las Vegas.

With nearly 150,000 hotel rooms in Las Vegas alone and more than 11 million square feet of meeting and exhibit space citywide, the LVCVA’s mission centres on attracting ever increasing numbers of leisure and business visitors to the area.

Find out more about visiting Las Vegas on the official website, or take a look here as Sapphire Goss takes a tour of some of the more off-beat attractions the city has to offer.