New Zealand is a land of natural beauty, interesting cultures and varying landscapes, but one of the greatest draws to the small nation for thousands of travelers across the world for the past twenty years has a more cinematic history: the beloved film adaptations of J.R.R. Tolkien’s The Lord of the Rings series and The Hobbit series.

And the interest hasn’t waned. The new prequel series created by Amazon TV, ‘The Lord of the Rings: The Rings of Power,’ launches globally on September 2, 2022 and follows in the first two movie series’ footsteps with thirty-eight filming locations across New Zealand.
Employing 1,200 local New Zealanders, the new series not only benefits the country by creating jobs but also by promoting the country’s stunning natural beauty and reconnecting fans with the world of Middle-earth.

“I just think that it’s a real showreel of New Zealand’s locations,” said Kevin Spring, the show’s Location Scout/Supervising Location Manager. “I’m just jaw-dropped, smacked in love with New Zealand locations. You look at where we’ve been and it’s just an incredible showcase of the country. You can understand how shows like this bring the tourists in.”

Tourism New Zealand’s latest global campaign, “If You Seek,” focuses on promoting aspects of the country’s transformational travel offerings, including Hobbiton, the movie set that became one of the country’s biggest attractions. According to visitor data, 69 percent of travelers or travelers interested in visiting New Zealand cite interest in visiting a film set or location there.

“New Zealand has had a strong connection to Middle-earth since Sir Peter Jackson featured our amazing locations in The Lord of the Rings and The Hobbit films,” said Rene de Monchy, Tourism New Zealand CE. “Many international visitors still cite the Lord of the Rings and The Hobbit as a reason for choosing New Zealand as a holiday destination, and we love that they’re able to come here and experience Middle-earth for themselves. The first season of the new Amazon series Rings of Power continues New Zealand’s association as the home of Middle-earth, and we look forward to seeing more visitors come to experience the otherworldly landscapes that we are known for.” 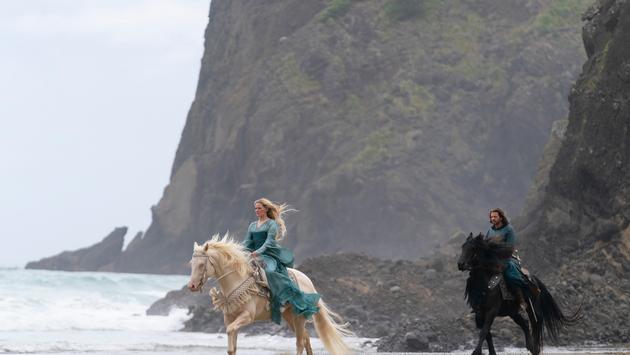 I think it’s all about locations, really,” said Pip Gillings, Unit Production Manager. “It’s locations, it’s the crew. It’s just being established as the home of Middle-earth. We have much to offer geographically, in a very small space where you can be in a tropical forest and into Fiordland within an hour and a half flight. There are not many places in the world where you can do that.”

New Zealand has welcomed two decades of interest in its varying landscapes, diverse geography and beloved filming locations due to the two movie series; it hopes to continue the trend of generating interest in and welcoming Tolkien fans with the new series.