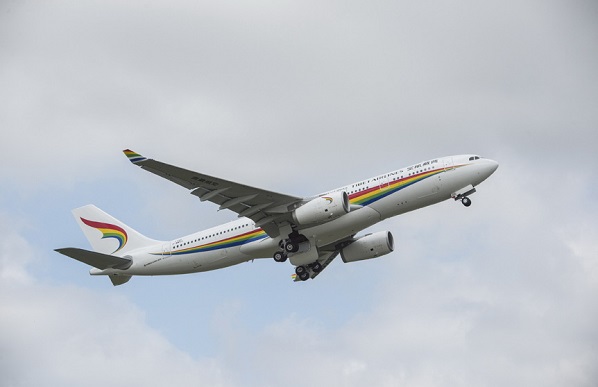 Lhasa based Tibet Airlines has received its first widebody aircraft, an A330-200 with increased 242 tonne maximum take-off-weight, following a handover in Toulouse, France.

The increased MTOW, the first A330-200 in China, allows airlines to operate from the most demanding high altitude airports where take off performance, additional range and improved operating costs are key.

The aircraft is configured in a three-class cabin layout- 12 business, 32 premium economy, and 235 economy - and deployed to open up new international routes.

Bai Weisan, president of Tibet Airlines, said: “We are extremely excited to receive our first widebody airliner – an enhanced A330 from Airbus and are very confident at its high-altitude performance.

“The A330 Family will become our core widebody to be deployed on our new international routes thanks to its flexibility, comfort and efficiency.

“With the A330, we are looking forward more passengers from all over the world to flying with Tibet Airlines and visiting Tibet.”

Eric Chen, president of Airbus China, said: “We congratulate Tibet Airlines on receiving its first A330 and we express our gratitude for the confidence demonstrated in our leading A330.

“With an operating base at high altitude Lhasa Airport and routes covering all of Tibet’s civil airports, the airline already benefits from the unrivalled performance of Airbus single aisle.

“We are proud the A330 is Tibet Airline’s backbone for international route expansion.”

The airline is famous for its high-altitude operations with its operating base at Lhasa Airport which is at over 3,500 metres altitude.

With the proven performance of Airbus narrow body, especially the A319 in high-altitude airports, Tibet Airlines has been successfully connecting Tibet with more domestic cities like Beijing and Shanghai.

It will exceed the airlines’ expectation on high-altitude performance also offer unrivalled efficiency, also greater comfort to the passengers.