TAM Airlines is to take delivery of four new Boeing 777s before the end of the year - the first to feature a new interior design developed exclusively for the airline by the British company, Priestmangoode.

Each plane has the capacity for up to 368 passengers. With the new planes, TAM will have eight Boeing 777s in operation.

With the concept of “From Home to Home”, the aim is to make the passenger feel that they are in an environment that feels homely, with a focus on comfort, entertainment and well-being.

The new First Class cabin on the new Boeing 777s presents the idea of a living room.

The environment is personalised, providing more privacy and interaction with the new sleeper seat and entertainment system.

There is also a couch, individual closets, lamp, dining table, cushions, a Nespresso service, and a library with books, editions of Wallpaper guidebooks as well as general interest magazines. 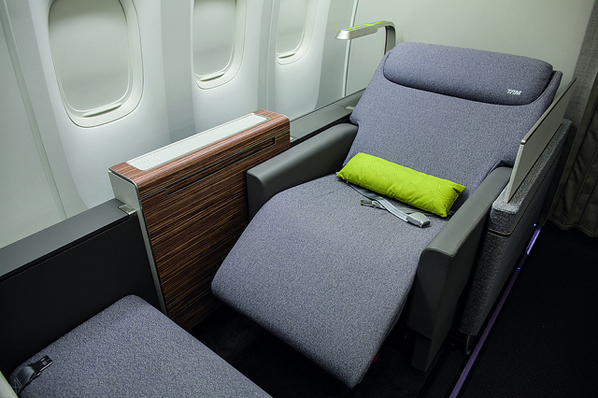 Improvements have also been made in the other cabins. Among the highlights are seats with a larger distance between them, known as TAM Space +, which now have more units on offer.

For passengers who opt for Economy Class there are new seats, which have a differentiated finish in three new colours - green, red and blue - that create a more pleasant environment for the passenger.

In addition, passengers in all classes can check out the design of the toilets that now have a floor with a pattern that is similar to the famous Copacabana sidewalks in Rio de Janeiro.

Another highlight is the new onboard entertainment service, which has been totally re-thought.

Customers can choose between films from several genres, with detailed information and the option to watch them with subtitles or dubbed.

There is also music, sitcoms and games; TAM Tips’ applications (with diaries and travel tips specially posted by customers who use the airline’s services); phone calls between seats in Business Class; eReader (with editorial from Brazilian weekly magazines); and Duty Free sales.

Through specially produced content, children can also have fun during flights with the characters from TAM Kids.