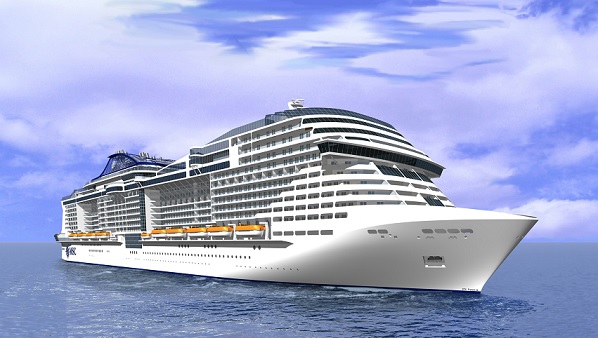 The two Meraviglia-Plus next-generation ships, as the new class of vessels is called, will feature increased tonnage and overall size, with a total of 2,444 cabins and a maximum capacity of 8,000 people, both passengers and crew.

The two new units will now be due for delivery respectively in October 2019 and September 2020, thus anticipating by nearly two years the delivery of the last of the now four Meraviglia STX France-made ships.

In another MSC Cruises industry-first, the two Meraviglia-Plus ships will feature the first and only classic and contemporary fine art museum at sea.

Pierfrancesco Vago, MSC Cruises executive chairman commented: “Our long-standing cooperation with STX-France and the continued growth of our business allows me today to confirm well-ahead of time the existing options for two additional ships.

“The two Meraviglia-Plus vessels will be even larger and longer as well as richer in features and amenities, thus confirming MSC Cruises as the industry’s boldest innovator when it comes to ship design and experiences we create for our guests.”

The MSC Cruises Meraviglia-Plus class is the next-level generation of ships for all seasons.

With its elegant, cutting-edge design and exceptional features, the elegant side of the Mediterranean, which lies at the heart of the MSC Cruises experience, is brought to life in the mastery of every detail.

At 331 metres long and with the addition of 200 more cabins, the two ships will feature a maximum capacity of nearly 6,300 guests.

They will also be able to call at all world cruise ports, thus maximizing guests’ choice of itineraries and destinations.

Additionally, Meraviglia and Meraviglia-Plus ships will look to set a new standard in smart ships as the recently announced partnership with Samsung brings next-generation technology with everything from latest displays and mobile solutions to medical equipment, as well as products for enhanced reality experiences.