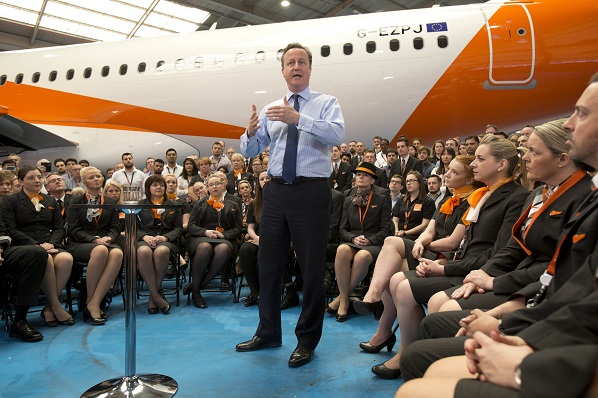 easyJet has welcomed British prime minister David Cameron to its headquarters in Luton.

Cameron gave easyJet employees the chance to hear for themselves the government’s view on the forthcoming EU referendum.

They also had the opportunity to put their questions to the prime minister during the event.

Speaking from its aircraft hangar in Luton, Carolyn McCall, chief executive of easyJet, commented: “easyJet was founded as a result of deregulation by the EU.

“We are now a true pan-European airline flying over 800 routes across 31 countries.

“The Airbus A320 aircraft here in the hangar is entirely manufactured in Europe, with the wings and other components made here in the UK.

“For easyJet and our passengers membership of the EU has been a good thing.

“The common aviation area created by the EU allows any European airline to fly anywhere in Europe.

“That’s it. There are no limits, no restrictions, no costs.

“This has kept all airlines’ costs low and has enabled low fares airlines like easyJet to expand.

“Since this agreement was introduced fares have fallen by 40 per cent and passengers have greater choice with 180 per cent more routes.

“If the UK were to vote to leave the EU any new, more restrictive aviation arrangements would add cost and therefore fares are highly likely to rise.

“And a weaker pound would mean the cost of a holiday abroad – including food, accommodation and drinks – would be more expensive.

“That is why we think it is better for our customers to remain in the EU.”

easyJet carries more than 70 million passengers every year on Europe’s most popular routes.