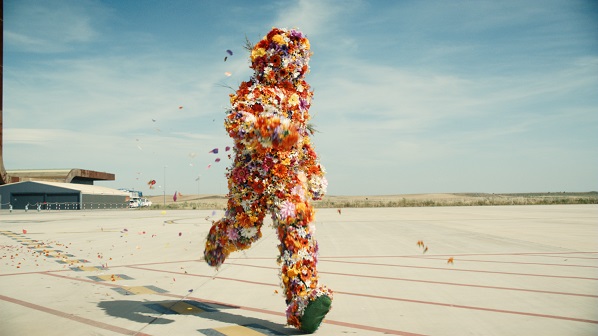 easyJet is launching a pan-European, multi-media advertising campaign which sets out to inspire people to travel across the continent.

Produced by creative agency VCCP, and shot by critically acclaimed directors, CANADA, the film features a generation easyJet traveller embracing her ‘Why not?’ attitude to the fullest, as her yearly travel itinerary comes to life inside an easyJet hangar.

The hangar is transformed into a magical orange-tinted world featuring everything from giant beach balls and orange typewriters, to water-skiers traversing over tarmac and freezing winter wonderlands.

There’s even a man made of flowers who, cheekily, appears to be running late for the commercial.

The ad is set against the rousing rock lyrics of British rock band, The Cult’s ‘Lil’ Devil, which adds a ‘get-up-and-go’ factor to an already energetic story line.

The campaign is supported by a pan-European €10 million media budget comprising of TV, outdoor, digital, press, cinema and social.

For the first time the campaign will also include motion digital outdoor, transforming the still ads into striking moving digital imagery.

It launches on tomorrow on Facebook and TV in the UK during the new series of X Factor.

Peter Duffy, easyJet group commercial director, commented: “With ‘Why not?’ we have a brand campaign which not only reminds and inspires people of the reasons why it’s great to travel, but it also underlines how easy and affordable it continues to be to fly with easyJet.

“There are so many great experiences across Europe which we can connect our customers to - all with fares as low as when easyJet was founded in 1995. Our new campaign captures this and delivers it with a fun and engaging creative concept.”