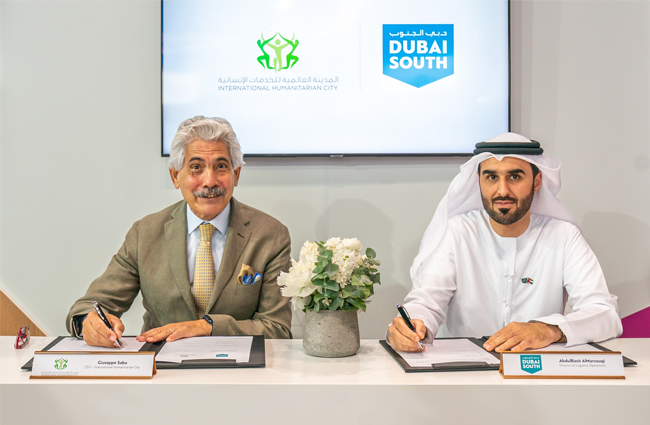 Dubai South, the largest single-urban master development focusing on aviation, logistics and real estate, has announced that it signed a memorandum of understanding with International Humanitarian City (IHC), the largest humanitarian hub in the world. The agreement entails the implementation of Masary, an e-gate pass system, at IHC to track and trace shipments within a secure network and ensure efficient management of cargo movement.

The agreement was signed during Seamless Middle East by Giuseppe Saba, CEO of IHC, and Abdul Basit AlMarzouqi, Director of the Logistics District at Dubai South, in the presence of senior members from both entities.

Giuseppe Saba, praised the agreement with Dubai South saying that it would take IHC humanitarian-aid shipments to a new level of efficiency and accuracy. He underlined the importance of an e-gate pass system, saying: “Logistics play a crucial part in IHC’s operations, and the e-gate pass system will strengthen the efficiency of IHC community’s emergency response. It will save time on aid shipment processing and, ultimately, save the lives of people in need. We would like to consider the signing of this agreement as a starting point for our partnership with Dubai South. Through this partnership, we hope to further develop any tool or facility that could help IHC and its community achieve the goals identified by His Highness Sheikh Mohammad bin Rashid Al Maktoum when he founded IHC.”

Commenting on the agreement, AbdulBasit AlMarzouqi said: “As a prominent logistics hub, we are committed to facilitating optimal smart operational solutions for our clients to ensure seamless services and the uninterpreted flow of goods. Dubai South’s Logistics District will continue to enhance its portfolio of offerings and address the increasing complexity involved in the movement of goods. As such, it will promote best practices and establish a tech-enabled dynamic ecosystem that would allow our valued clients to thrive in this competitive market.”

Dubai South was launched as a Dubai Government project in 2006, representing an emerging 145-square-kilometre, master-planned city based on the happiness of the individual. The city is identified as Dubai’s flagship urban project and is designed to create 500,000 jobs in an integrated economic environment that supports all types of businesses and industries.

IHC, which was founded in 2003 by His Highness Sheikh Mohammed bin Rashid Al Maktoum, Vice President and Prime Minister of the United Arab Emirates and Ruler of Dubai, is the only non-profit, independent, humanitarian free-zone authority, hosting a community of around 85 members comprising UN organisations, non-profit and non-governmental organisations and commercial companies. The international humanitarian community in Dubai consists of about 500 people, representing around 80 nationalities, thus positioning itself as the largest humanitarian hub in the world.