The Middle East’s travel elite will celebrate their achievements when the World Travel Awards, the industry’s highest accolade, comes to Dubai on the 5 May 2009 at The Monarch.

Over 500 travel and tourism brands from across the Middle East have been nominated for the awards, which is hailed as the “Oscars of the Travel Industry” by the Wall Street Journal.(Above: HH Sheikh Ahmed bin Saeed Al Maktoum and HH Prince Al-Waleed bin Talal bin Abdul Aziz Al Saud with Graham Cooke, President,  World Travel Awards)

This year’s event promises to be the most hotly contested ever as leading players address the global downturn by raising their standards even higher. 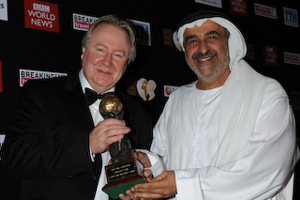 (Above: HH Sheikh Faisal Al Qassemi with Graham Cooke, President of the World Travel Awards at the 2008 Middle East Ceremony)

The World Travel Awards will also be launching its inaugural Prix D’Or award - attendees at the gala ceremony will be invited to nominate live on the night the brand that they think has contributed most to the Middle East’s travel industry over the past 12 months. The evening will culminate with the Prix D’Or winner being announced in front of the star-studded audience.

“Dubai is spearheading the globe when it comes to luxury travel, world-class service and innovative tourism products. Its offerings are setting the benchmark for the industry worldwide, so it is fitting that we will host our Middle Eastern regional ceremony here,” says Graham Cooke, President of the World Travel Awards.

“It is a cautious time no doubt. The industry has its eyes open. But I am very optimistic that Middle East will come out winning,” he added. “The economic challenges will push companies to make strategic moves that will benefit them as well as their clients. I am very positive with the opportunities that lay forth for Dubai and the region.

“The winners of the World Travel Awards Middle East Ceremony have the chance to lead the way, pushing the boundaries in every aspect of business activity, creativity and customer satisfaction, competing at the very highest level and showing the world how it is done.”

Winners are decided by votes received from agents and travel professionals in the Middle East and throughout the world.

The World Travel Awards, established 16 years ago, encourages travel and tourism organisations to set new boundaries for quality, value and innovation in their quest to create the ultimate travel experience.