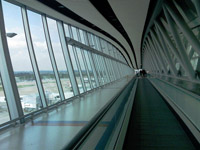 An historical shake-up of British aviation nudged one step closer today after the Competition Commission today proposed that BAA must sell two of its London airports.Following the tougher-than-expected report, BAA will most likely try to sell Stansted and Gatwick, whilst hanging onto Heathrow.The Commission has also recommended that the company should sell either Glasgow or Edinburgh. It will, however, be allowed to retain Aberdeen and Southampton airports.

It also said that competition was being affected by planning rules, government policy and the system of regulation as well as BAA’s ownership of the seven airports.

Christopher Clarke, chairman of the BAA Airports inquiry group, said: “We have provisionally found that there are significant competition problems arising from BAA’s common ownership of seven UK airports.

“This has resulted in investment that is not tailored to the requirements of airport users and lower levels and quality of service for both airlines and passengers.”

Clarke said he was now seeking views on which two London airports should be sold, and whether Glasgow or Edinburgh should be sold.

The commission acknowledged that a key problem was the shortage of capacity in the south-east of England which limited the scope for competition in the short term.

BAA’s London airports are effectively working at full capacity but the report rejected the company’s argument that as long as capacity was constrained there was no scope for competition.

“We take the opposite view; unless the market is opened up to competition, there is a serious risk that the current capacity constraints will persist, certainly longer than in a better functioning market,” Clarke said.

BAA has reacted by warning that the proposals threatened to delay the construction of new runway capacity and would make things worse for passengers.

BAA’s chief executive Colin Matthews said there were areas where the commission’s analysis was flawed and the remedies “disproportionate and counter productive”.

“Just as the government is about to make the decisions that could lead to the first full-length runways being built in the south-east since the second world war, the commission risks creating uncertainty, delay and confusion at exactly the wrong time.”
The commission will now put its provisional findings and suggested remedies out to consultation with a final report expected in December.
——-