Saudi Arabia is very highly regarded for its religious tourism, but geo-politiclal circumstances have created a shadow of controversy and mystery surrounding the region as a tourism destination. BTN interviewed Prince Abdulaziz Bin Fahad Bin Abdullah, Deputy Secretary General for Investment & Marketing of the Supreme Commission of Tourism, Saudi Arabia, to find out what measures the Supreme Commission is taking to encourage international travellers to visit Saudi. BTN: Saudi Arabia is very well known and highly regarded for it’s religious tourism. How much are you managing to develop other types of tourism like leisure tourism and historic tourism?

Of course Saudi Arabia as a country that constitutes 82% of the Arabian Peninsula was the birth of many civilisations and vast history and that by itself is an intellectual property of Saudi Arabia but yet Saudi Arabia has tremendous typographies - it has beautiful coastlines and what is very important is that it has diverse cultures which could contribute to any tourism product which could be offered in an international market. Religious tourism is a very important vertical that Saudi Arabia has, but to us, serving the pilgrims is a mandate by our government, is something that we are honoured to provide. Providing services is the responsibility of the private sector to make sure their experience is unsurpassed and memorable. What the SCT is doing is working in the private sector to develop different tourism verticals for different vertical markets. Cultural tourism, religious tourism, health tourism, sport tourism, eco-tourism, etc. All within our religious framework, all within our rules and regulation and what our culture accepts.

BTN: Looking at the rules and regulations, will you be making it easier for non-Muslims and people from other countries, particularly women, to travel into Saudi?

We do have - before even the existence of The Supreme Commission for Tourism, there were various packages for Saudi Airlines for different inbound tourists coming to Saudi and the experience was overwhelming. We have no problem for inbound tourists coming to Saudi. The only issue is that we want to make sure as the SCD that their experience will be one of a kind and to do so the SCD conducted massive surveys and researched the past four years to develop a 20 year strategy for The Kingdom. We have studied many different countries and business models and came up with a 5 year action plan. We want to make sure that the private sector is in a good position to serve inbound tourists and we are almost there. 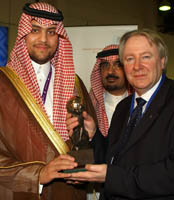 BTN: How much is security a concern in terms of promoting Saudi as a safe place?

Security internationally, if we look through history, is not really an issue that has a long term impact on tourism compared to other factors. Saudi Arabia was not impacted by the latest events, but Saudi Arabia is taking an aggressive role in demolishing terrorism.
Inbound tourism by pilgrims and other tourists has increased by 21% which is an indication that there has been an impact. In fact there was a growth - not to neglect the impact of such events. But Egypt is a very good example of how tourism rebound immediately after the unfortunate circumstances. Terrorism will never win under any circumstances.

BTN: How much do you see tourism in Saudi Arabia playing a role in increasing understanding between the East and West and of the West’s interpretation of Islam?

I think tourism is one of the most powerful tools in bringing civilisations together. There is a great tendency for different nationalities to understand different cultures and that is what Saudi Arabia has to offer - people can blend, see our people, rub shoulders, drink what they drink and eat what they eat.
——-