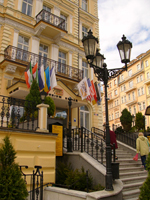 When most of us head off on a spa vacation, we prepare ourselves for a couple weeks of rest and relaxation amid aromatherapy infused airs. We look forward to soothing massages, steam baths, fresh fruit, candles, waterfalls and bikini-clad bodies strung alongside the beach or pool. We usually don&#8217;t think about packing a spare set of medical records, stinking mud packs, consuming putrid water elixirs, or being surrounded by fellow guests who happen to be 50+ and afflicted by one ailment or another.

Well, if you are heading off to one of Eastern Europe&#8217;s famed medical spas, you better be geared up for that and a little more.

For centuries Europeans have been healing chronic diseases such as arthritis and skin afflictions using Balneotherapy - a natural approach to health and healing that uses hot spring water, gases, mud and climatic factors (such as heat) as therapeutic elements. Because of the high mineral concentrations in the waters running beneath a large part of Eastern Europe, there are numerous spas that specialize using their natural resources in treating different disorders. Because the strengths and types of minerals differ in each region, every spa varies in which diseases it treats and the method in which they treat their patients. Spas in Slovakia, for example, are known for their thermal waters laden with an abnormally high consistency of mineral. These waters are not for drinking, but rather for bathing and are notably used to treating arthritis-related disorders. Spas in the Czech Republic on the other hand are acknowledged for their less pungent waters, which can be drunk, and are used in healing a plethora of internal diseases such as ones that afflict the digestive system, metabolism, diabetes, cholesterol, obesity, as well as joint and spinal pain.

In order to be properly treated, most doctors and therapists recommend at least two weeks of Balneotherapy to guarantee lasting results. Because so many ailments, like arthritis and diabetes, are not curable, patients often return on a yearly basis to maintain the favourable outcome. In fact, about 70% of medical spa-goers from this region of Europe are return guests.

Here are a few notable medical spas from Eastern Europe and what they specialize in:

Located in the small town of Piestany, one and a half hours outside of Bratislava, Slovakia, Spa Piestany specializes in treating various forms of arthritis, fibromyalgia, scoliosis, degenerative joint diseases, central and peripheral nervous system disorders.

The main treatments are based on thermal water and mud that are extracted from the bed of the River Vah. Mud preparation facilities are located right on the spa premises. All mud used at Spa Piestany is matured with mineral water for at least one year before it is employed in treatments. Because the mud from this area is sulfuric, visitors can expect a not so pleasant scent when within the spa&#8217;s treatment areas.

Located about two hours from Bratislava, Spa Smrdaky is affiliated with Spa Piestany. Spa Smrdaky, however, boasts the strongest thermal water in Slovakia. So strong, in fact, nurses must notify guests to remove silver jewelry before bathing because the consistency of the water will destroy the metal.

Spa Smrdaky is not a luxury spa. It feels much more like a medical facility with a holistic approach. Because the waters are so strong in mineral content, doctors advise patients to take the treatment process slow, gradually increasing the therapy over time. Such high concentrations might produce stress on the immune system.

Again, visitors should be prepared for a very strong smell of mud and mineral water in the spa center. The word &#8220;Smrdaky&#8221; can be translated from Slovakian language as
&#8220;smelly,&#8221; or &#8220;stinky.&#8221; Guests, however, tend to get used to it quickly, especially once they realize the smell comes from a substance that could possibly heal them.

Located in the spa town of Karlovy Vary, Czech Republic, this spa, like Spa Smrdaky, is medical rather than relaxation-oriented. Spa facilities are situated in many small cabins, each one allocated for different procedures and treatments.

The most popular programs at Spa Bohemia Lazne, as well as at the other spas in Karlovy Vary, are for the digestive system. Doctors prescribe patients certain amounts and types of mineral water to drink throughout the day.

While the treatments are medical and sometimes not enjoyable, the food at Bohemia Lazne is outstanding. The combination of Czech and German cuisine creates
unforgettable dishes with rich flavor. Dietary dishes are also available for those
who have diabetes and other metabolic disorders.

For more information regarding the above spas and other medical spas in Eastern Europe, contact Azimuth Travel. Azimuth Travel specializes in arranging trips to Eastern European Spas and offers a number of spa packages that include hotel accommodation, spa program specific to ailments or simply for relaxation, full board and
car transportation. Visit website www.azimuthtravel.us for more information and
reservations. For calls in US and Canada: 1-888-216-0133. For calls outside US and
Canada 1-201-451-8399.
——-