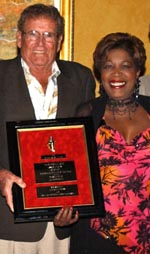 As a mark of respect veteran of the Caribbean hospitality trade Jim Pepperdine has been named Honorary Caribbean Hotelier of the Year at a gala dinner held in Miami last week. Pepperdine is the creator of the acclaimed Caribbean Hotelier of the Year Award which he founded in 1977. The award was emplaced to honour excellence in hotel operations, as well as leadership and achievement in fostering the goals of the entire Caribbean hospitality industry.In line with the trades tradition, Pepperdine was presented the Golden Conch Award, aptly named as the actual award is a gilded conch shell mounted on a mahogany pedestal.

Upon receiving this Award as Honorary Hotelier of the Year, Pepperdine said, “I consider the creation and presentation of the Hotelier of the Year Award as the highlight of my career in the Caribbean. I will forever treasure and appreciate that the past winners have selected me as an honorary member of this prestigious award.”