A forgotten 18th Century port creates the backdrop for Jamaica’s next generation of cruise experiences.

Just 22 miles east of Montego Bay, Falmouth today is noted as someplace you pass on your way to someplace else. But the town has a wonderfully storied past - one in which astonishing wealth, politics and even love came crashing together in a heady history. And that glorious history is set to propel the town to becoming one of the Caribbean’s most culturally vibrant cruise destinations.

By autumn 2010, the Port Authority of Jamaica (PAJ) expects to debut Falmouth as a major cruise port with facilities to host the Oasis of the Seas. The destination will deeply reference the town’s history, offering visitors a unique sensory experience of the Colonial era. This will be one of the largest developments undertaken by the PAJ. 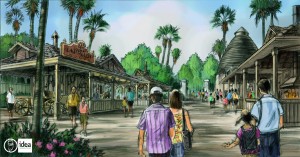 Falmouth was founded in 1790 from land owned by Edward Barrett. His grand-daughter Elizabeth Barrett Browning would later be celebrated as one of the greatest poets in the English language, but Edward put the family in a notable position long before that, as the brilliant steward of the family’s wealth granted by Cromwell’s parliament, and also as the developer of what would become one the wealthiest ports in the New World.

By the late 1700s, Jamaica was the world’s leading sugar producer. This was certainly nowhere more evident than in Falmouth and the 88 sugar estates in the region.

The town was meticulously mapped out and in the Colonial tradition, streets were named after British royalty and heroes. Flush with the wealth from their holdings, planters were eager to show off their good fortune with second homes in the town. Commerce also developed at a brisk pace and soon the merchants themselves had much to show for the boom.

Spurred by the wealth of their clients—both planters and merchants—the architects and builders extravagantly adopted Georgian architecture, using the finest materials. By the late 1700s Falmouth boasted around 150 homes, described at the time by one observer as “superb, elegant, and substantial.” The town was noted for having some of the best representations of Georgian architecture outside of Britain.

Elizabeth Barrett’s connection with Falmouth transcends the town being founded by — and nearly named after — her grandfather, yet in the sweetest irony of all, she never visited Jamaica. Elizabeth had a terrible falling out with her father (himself born in Jamaica) over her courtship by fellow poet Robert Browning, and she was saved from absolute destitution when her uncle Samuel, bequeathed to her all his Jamaican properties.

It is expected that Falmouth’s rich heritage will provide an impressive backdrop for the new cruise destination. The design will draw on the many inspirations not just in terms of the social and architectural history, but also on the landscape of the area.

Falmouth is in close proximity to some of Jamaica’s leading attractions and adventures including rafting on the Martha Brae River; the Greenwood Great House (also a former Barrett residence); swimming with dolphins at Dolphin Cove, nature adventure tours at Chukka Caribbean Adventure Tours and also Jamaica’s wild heart: the Cockpit Country, the mountainous home to flora and fauna found nowhere else in the world.

Perhaps more than anywhere else in the Caribbean, Jamaica has the range and scope to match the varied interests of cruise visitors. Now, with Falmouth on the charts, the island is well on its way to raise the bar of visitor satisfaction even higher.