Etihad Airways continued its industry-leading growth in the first quarter of 2012, with a 28 per cent rise in revenue to US$ 989 million over the corresponding period in 2011.

Passenger numbers at the World’s Leading Airline also soared by 500,000 to 2.4 million.

Etihad chief executive officer, James Hogan, said: “We met all our revenue targets and budget estimates in the first quarter, despite the challenging economic conditions confronting the international community.

“Despite the tough economic times we believe our business model of organic network growth combined with codeshare partnerships and strategic equity investments will enable us to continue to prosper and ensure sustainable profitability.”

The record results were announced as Hogan unveiled plans for a significant expansion of the airline’s global network over the next 18 months.

These included a daily service to Etihad Airways’ first South America destination and a new service to Vietnam.

Hogan said the South American flights would begin mid next year with details of the first destination now being finalised.

“This is a logical next step for us and will mark the sixth continent we serve and our coming of age as a truly global airline,” he said.

Etihad also planned to replicate the success of its European expansion by introducing additional frequencies to a range of other destinations in Asia and Australia.

Hogan added: “We continue to outperform much of the global airline industry, with spectacular growth in revenue, the number of passengers flown and freight carried.

“Our expanded network through organic growth and partnerships has reached a critical mass that is now powering our business forward.

“Our seat factor hit a record high but yields, particularly in the premium cabins, remain a challenge.”

Already in the first quarter of 2012, Etihad has announced the launch of non-stop daily flights to Washington DC, begun flights to Tripoli, Shanghai and Nairobi, and will soon start services to Basra and Lagos, as well as increase flight frequencies to Düsseldorf, Bangkok, Cairo, Kuwait, and Dammam.

Extra capacity will also be added to London Heathrow and Kuala Lumpur.

The national airline of the United Arab Emirates now has a worldwide network that stretches across 84 cities in 54 countries.

Etihad Airways will take delivery of seven new aircraft in 2012 – three Airbus A320s and four Boeing B777s, with the first three-class B777-300ER deployed on the London route from July.

The carrier’s fleet will have grown to 71 aircraft by year’s end.

Seat factor jumped by 3.8 percentage points to 76.5 per cent, the highest first quarter level in the airline’s history. 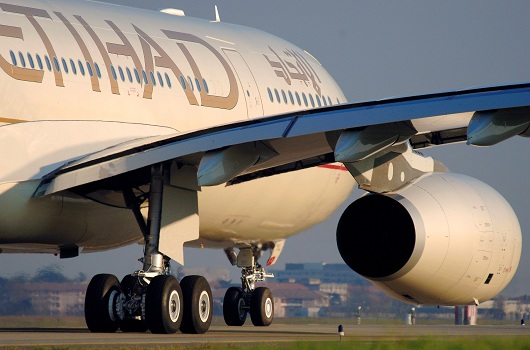 Hogan highlighted the importance of Etihad’s partnership strategy in boosting passenger numbers in the first three months of the year.

“We are flying with fuller planes across the network and our codeshare partnerships played a major role in this growth, accounting for 18 per cent of our revenues in the quarter,” he said.

Recently Etihad Airways announced China Eastern Airlines had become its 37th partner airline with the signing of a memorandum of understanding that encompasses   joint route and schedule coordination, codesharing between the UAE and China and, in time, on each other’s networks.

“Our equity investments, in airberlin and Air Seychelles, are already bearing fruit and we are starting to see both revenue and cost benefits from synergies with each carrier,” explained Hogan.

Etihad and airberlin will save millions of dollars integrating their Boeing 787 Dreamliner programs and the UAE flag carrier is also extending the benefits of its billion dollar deal with travel technology provider Sabre Airline Solutions to airberlin.

Escalating fuel costs, in particular, had a major impact on the aviation sector during the quarter.

“Fuel prices are our largest variable cost and they are tracking higher than 2011.  We remain committed to an active fuel hedging strategy.

“Eighty per cent of our first quarter’s fuel costs were hedged and we currently have 74 per cent of fuel costs hedged for the rest of 2012,” he said.

In March, Etihad Airways increased the fuel surcharge on its European flights to offset the costs being imposed on the airline by the European Union (EU) Emissions Trading Scheme (ETS).

Etihad Airways beat its 2011 break even target last year when it posted a net profit of US$14 million.

Despite an industry-wide slowdown in air freight markets, Etihad Cargo defied the trend with revenues up 12.2 per cent to US$159 million.

The airline said volumes had been strong, load factors increased and it continued to adjust freighter flying to meet customer needs.

Hogan added: “We have capitalised on more freighter flights into Central Asia and Libya early in the year and made better use of the bellyhold capacity of our newer passenger routes, such as Düsseldorf, Shanghai, Chengdu and Tripoli.

“On the strength of our success, two new freighters were ordered in the first quarter for delivery in 2013 and 2014.

“We also continue to leverage our new corporate partnerships with Air Seychelles and airberlin by putting our networks together to offer more choice to cargo customers.”

Hogan said sensible investments would continue in all areas of the business.

“This encompasses all our key priorities – safety, service, training, product and partnerships.

“And of course we remain firmly focused on ensuring 2012 will be the most profitable in the airline’s history.

“We’ve made a good start and will now build on our success over the next nine months,” he concluded.