Pegasus might just be the largest airline many travellers have never heard of.

While Emirates, Qatar Airways and Etihad Airways, not to mention Turkish Airlines, have been making the headlines, redefining long-haul aviation in the Middle East, Pegasus has quietly built its position as a dominate regional carrier.

With a hub at Sabiha Gökçen International Airport, Istanbul’s second airport, the airline dates to the late 1980s, when it began life as a scheduled operator ferrying leisure passengers to Mediterranean resorts.

Following a take over by ESAS Holdings, and the appointment of Ali Sabanci as the chairman, in 2005 things really took off.

Bringing the low-cost model to Turkey for the first time, Pegasus was able to offer affordable flights to a growing audience of passengers while keeping the quality of service high by investing in a new fleet and state-of-the-art technology.

Today, as a purely low cost-carrier, the airline offers departures across a network of 84 destinations in 35 countries, flying one of the most modern fleets in global aviation.

The number of guests flying on both domestic and international flights reached 9.2 million during the first six months of 2014, an increase of more than a fifth on the previous year, while Pegasus flew nearly six million passengers in Turkey alone during the period. 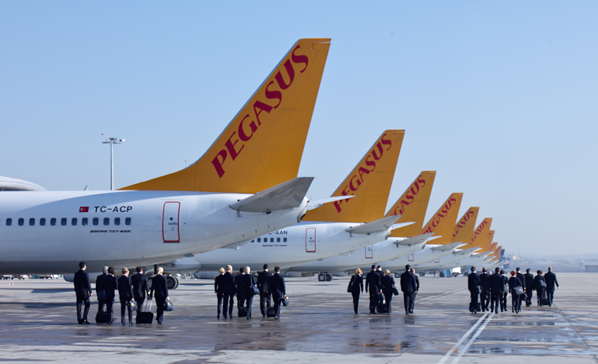 As Pegasus general manager Sertac Haybat explains, the airline has made the most of competitive advantages such as its geographical location, flight network and low-cost structure. We will continue to be one of Europe’s fastest-growing low-cost airlines in the coming period with our high rate of average daily aircraft utilisation.”

He adds: “In an expanding market we have increased our capacity, while at the same time continuing to increase our market share as we have done in recent years.

“We have also succeeded in reducing the cost per available seat kilometre by using our aircraft efficiently.”

The horizon appears to be bright for Pegasus.

The airline has expanded its international network during 2014 with nine new routes into Western Europe, the Balkans, Russia and the Middle East added. New destinations include Budapest, Frankfurt, Hamburg, Kuwait, Madrid, Geneva, and Prague.

As a rapidly growing airline, Pegasus also benefits from one of the youngest fleets in the region, with its aircraft having an average age of just over four years.

Following the model established by Southwest Airlines and more recently Ryanair and easyJet in Western Europe, Pegasus has also based its fleet largely around one kind of aircraft, in this case the Boeing 737-800.

This keeps maintenance costs low, while the efficient aircraft has proved its worth during a time of persistently high fuel costs, which have hit airlines with older fleets disproportionately hard.

Showing its ambition, Pegasus placed the largest order in Turkish aviation history in 2012, striking a deal valued at $12 billion with Airbus for 100 A320neo and A321neo aircraft.

These aircraft feature a new generation of more efficient engines and sharklets (vertical wing tips) that together generate fuel savings of 15 per cent per aircraft per annum when compared to the classic Airbus A320 model.

At today’s fuel prices this represents approximately US$1.5 million in savings per aircraft per annum, as well as 3,600 tonnes in saved carbon dioxide emissions. 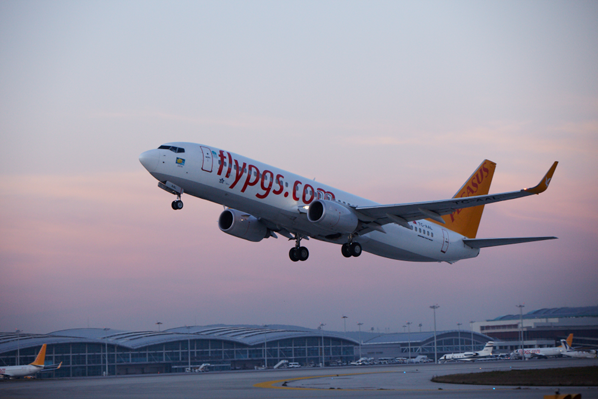 The order was part of what the carrier describes as a vision to create a ‘Fleet of the Future’, with a path of growth in place until 2023.

Chairman Sabanci explains: “As we look ahead to the next decade, we know that, apart from human resources, an airline’s most important asset is its fleet; thus, once again, we have said to ourselves, ‘this is not enough;’ and so we continue to expand our fleet with this historic order of aircraft.

He added: “With this pioneering investment in 100 new aircraft, we at Pegasus are breaking new ground in the development of Turkish civil aviation.”

For travellers from Britain Pegasus offers a range of destinations just beyond the fringes of rival low-cost carriers.

With the odd exception, destinations offered by Ryanair stop at the borders of Europe and North Africa, for example. In contrast, through its hub in Istanbul, Pegasus is able to offer low-cost departures to Beirut, Baku, Almaty, Tbilisi, and Tehran.

Pegasus flew 305,538 guests to and from UK during 2013, with most popular destinations being Istanbul and Ercan (North Cyprus), followed by long-haul routes to Dubai and Tel Aviv.

This popularity has made the carrier the fifth largest at its UK base at Stansted in terms of the number of passengers carried.

Pegasus also invests hugely in the UK through its growing routes and via high-impact advertising and PR campaigns.

With so much in store many more passengers are likely to be hearing of Pegasus in the very near future.

For more on low-cost airline Pegasus, or to book tickets, head over to the official website.