A delegation from QuébecOriginal has visited London to showcase the 14 signature experiences of the Canadian province.

While primarily known to a UK audience for the city of Montréal, the French-speaking province in eastern Canada has a great deal more to offer, explained Dominique Labelle, director of international business development, QuébecOriginal.

She told an industry audience at Shakespeare’s Globe on London’s South Bank: “We are pleased to be in London to meet with the travel press and trade to promote Québec and discuss opportunities to raise further awareness of the province in the UK market.

“The focus of our sales and media mission this week has been to introduce our 14 signature experiences and the strategy has been very well received.

“Overall, the mission was a great success, we recognise that there is a lot of potential in this market to drive further UK visitors to Québec and we look forward to welcoming them in the near future!” 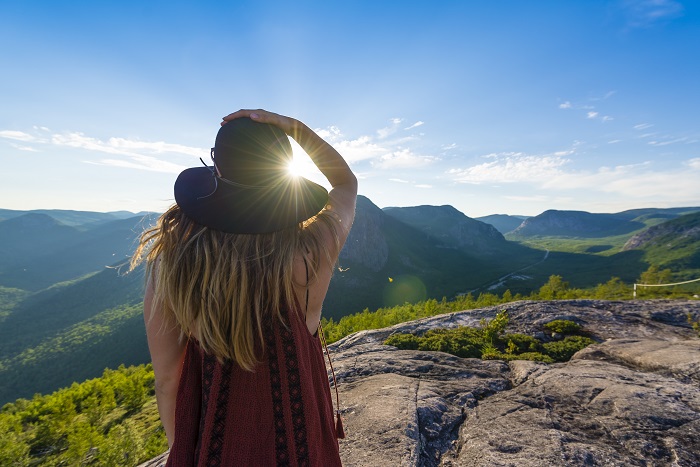 Top of the agenda was the great outdoors, with everything from hiking, trekking, and water sports on offer.

Québec offers an infinite array of marked trails and outdoor activities to commune with nature and all its beauty in any season.

In addition to the many recreational facilities located close to cities, Québec has over 30 national parks throughout its territory.

With the amount of snow that Québec gets every year, it is also easy to understand why it is where the snowmobile was invented.

The province boasts one of the largest snowmobile networks in the world, with over 33,000 kilometres of marked and maintained trails across its territory.

Québec is recognised worldwide for the quality and diversity of the many festivals and celebrations that take place across its territory.

As a highly creative people with a contagious joie de vivre, Quebecers are ready to party 12 months of the year.

Music, humour, gastronomy, cinema, or artistic, cultural and sports events: everything is an excuse to celebrate and share memorable moments.

Québec’s culinary fame is also a draw, with its poutine and delicious maple products, which have long transcended its borders, and or course the fabulous seafood from its coastal regions.

But Québec cuisine is also the know-how of highly talented chefs, whose audacity and curiosity are helping make Québec a global gastronomic hub.

Local flavours are also being created by microbreweries, winemakers, cheesemakers, chocolatiers, and a host of other artisans and regional producers. 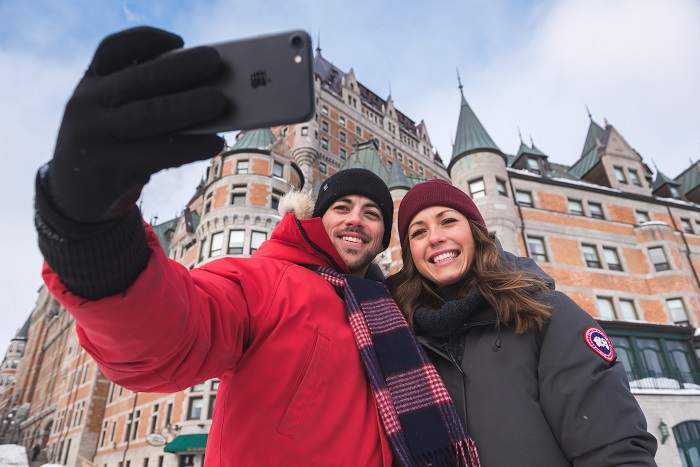 Founded under the name of New France, Québec is the cradle of French civilization in North America, with over 400 years of history marked by the French and British regimes, and the exchanges with First Nations peoples that preceded them.

From this eclectic and innovative mix evolved a unique culture that can be explored through music, the arts, museums and economuseums, historic sites, architecture, and more.

Added to these is the legacy left over from major events that sparked the collective imagination, including the Expo 67 World Fair and the 1976 Olympic Games.

With close to 75 downhill ski centres across Québec and a multitude of cross-country trails and areas for high-elevation cross-country skiing in picturesque natural environments, skiers, snowboarders and cross-country skiers can make the most of our superb Nordic landscapes.

In Québec, all roads lead to a discovery, with a number of road trips on offer devised to showcase the region.

Take a step back into the past by following the Chemin du Roy, admire the vistas along the many tourist routes, including Route du Fleuve (River Route) and
Route des Navigateurs (Navigator Route), or visit one of the 22 vineyards along Route des Vins (Wine Route).

From moose to humpback whales, Canada geese to great blue herons, Québec is home to close to 650 animal species, including 90 mammal species and 300 bird species.

Several of these may be observed in their natural habitat in the course of a nature walk.

The list includes migrating birds, land mammals such as white-tailed deer, moose and caribou, bears and beavers, as well as marine mammals, such as whales, which are abundant in the St. Lawrence River Estuary. 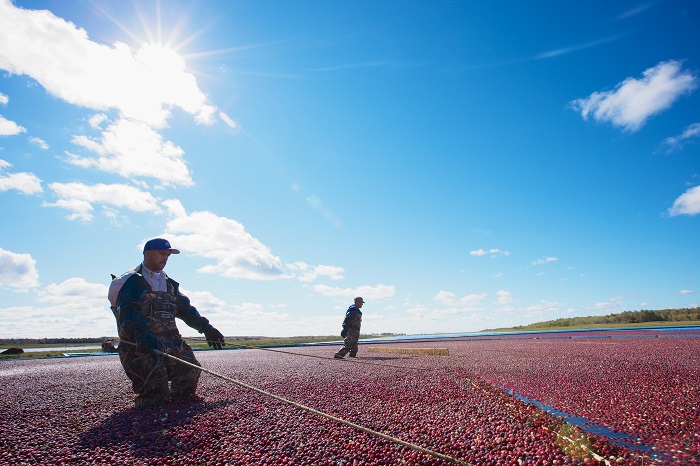 The St. Lawrence is a river, an estuary and a gulf.

It is also one of the longest rivers in the world, flowing across Québec from north to south over almost 2,000 kilometres.

Past Québec City, the river widens and mingles with saltwater to become a unique marine environment featuring islands, beaches, fauna, flora and tides, which is home to whales, belugas, humpbacks, dolphins and seals, to the delight of visitors who come to observe them.

Some 150 cruises of all types are on offer up and down the St. Lawrence River.

Whether you wish to explore a city or go on a nature excursion, there is no better way to discover Québec and take in the beauty of its scenery than on a bike.

With some 12,000 kilometres of cycling paths criss-crossing its territory, Québec boasts the largest cycle network in North America. 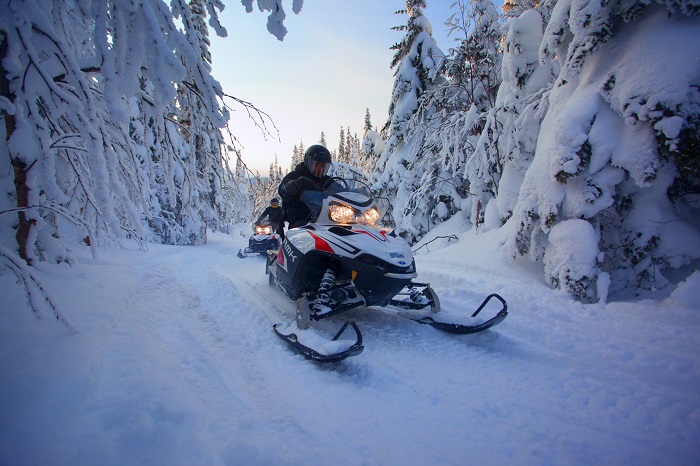 For Quebecers, hunting and fishing are a legacy that has been passed down through the generations.

Once essential to survival, today they have become sporting activities that allow its enthusiasts to get close to nature. Québec has a million lakes and rivers containing some 30 species of fish, as well as 15 wildlife reserves and over 600 outfitters, which are organisations specialising in hunting and fishing expeditions, including salmon fishing, a very popular sport on some of our beautiful rivers.

Like its people, Québec’s cities are welcoming, diverse, creative, and alive in any season.

They are filled with history, and always only a step away from nature.

Québec City, for example, the cradle of French civilization in North America, has had its historic quarter elevated to the rank of World Heritage Jewel by UNESCO.

On foot is the best way to discover this, the only fortified city north of Mexico, with its many promenades, pedestrian alleys and great variety of restaurants and shops, unless you prefer simply to lounge around on the Plains of Abraham. 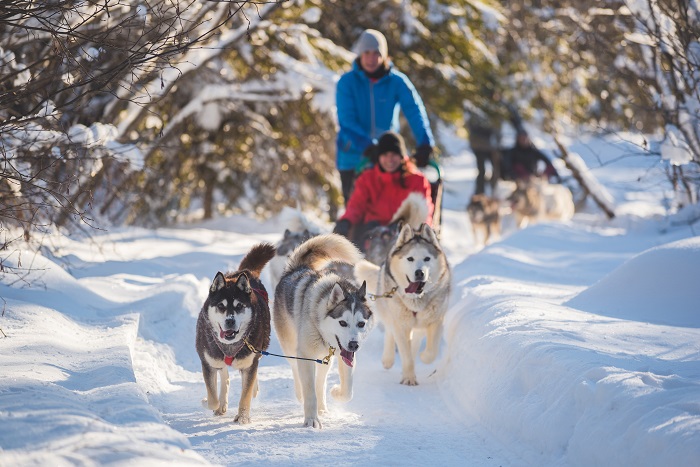 Experience one of Québec’s many holiday resorts and vacation centres located just outside major cities, in the heart of the mountains, or along the riverside.

Whether you are looking for a romantic escape or a holiday with family and friends, you will find everything you need: from comfy country inns to rustic cottages; from sophisticated cuisine featuring local products to meals prepared in the comfort of your accommodation.

Wherever you are, you will have access to a vast array of activities, including golf, fishing and water sports in the summer, or cross-country skiing, snowshoeing and dogsledding in the winter, to name just a few.

Thanks to its rich native heritage, Québec can offer a rare experience steeped in history and authenticity.

Discover 11 culturally distinct nations at the origin of a vibrant cultural identity that is rich, colourful, and diverse.

Find out about the traditional know-how that helped Europeans adapt to Québec’s wilderness when they first arrived almost 500 years ago, and which indigenous people have passed down from generation to generation and proudly share through their culture, gastronomy, spirituality, and reverence for nature.

First Nations are a captivating people whose legacy includes, among many other things, snowshoeing, rabaska, ice fishing, and maple syrup.

Find out more about visiting Québec on the official tourism website.