Allegiant Air is facing a problem which most travel companies – especially airlines, would love to have. The Nevada based low-cost airline is growing so fast that it now has to make a stark choice in terms of its future direction. 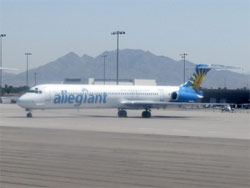 Allegiant Air traffic jumped 46.1% in September, with paying passengers flying 292.2 million miles, as compared to 200 million a year ago. If you don’t take into account their charter service, Allegiant said the traffic jumps 59.6%. Morgan Stanley recently bumped up Allegiant’s (NASDAQ: ALGT) price target from $46 to $49.

And in order to milk this growth and keep growing some more, Allegiant has to look beyond a guerilla strategy of keeping costs low by using forty-three MD-83 jets to service leisure travelers on 60 non-competitive routes between small airports and major resort areas.

That and padding the bottomline with a long list of ancilliary fees which apparently accounts for an astonishing 22.7% of Allegiant’s revenue.

The options facing Allegiant are to either play with the big boys in the air and add more popular routes, or to look beyond the air and increase focus on revenues on the ground.

As per their CEO, it looks like Allegiant is more intent on spreading its wings on the ground, with plans to become a full-fledged travel company offering bookings for all your travel needs, by leveraging the popularity of the Allegiant Air website to sell other services.

In fact, Allegiant Air’s parent company is Las Vegas based Allegiant Travel Co. Allegiant co-founder and CEO Maury Gallagher (Maurice J. Gallagher, Jr.) went so far as to tell the Financial times that “the eventual goal is to sell flights from other airlines on the Allegiant site.”

And it makes sense too. Gallagher says that the brand will soon be identifiable to 100m people in the US. Throw in the fact that around 30% of Allegiant’s customers already buy their bundled travel packages which include hotels, car rentals and show tickets. If Allegiant shifts their focus entirely to selling travel packages, you’re looking at a potential travel behemoth in the making here.