Dublin Airport welcomed the opening of Terminal 2 over the weekend, but what was once a monument to Irish prosperity is in danger of becoming a symbol of economic overreach.

At its peak the project was the largest construction site in the state, employing up to 2,600 workers on site. But many of these jobs have been lost, in line with thousands more across Ireland as the recession bites.

Last night the Irish economy hit a new low, agreeing to take billions in emergency funding from the European Union and International Monetary Fund to protect the faltering economy from collapse.

While the exact terms of the bailout will be negotiated over the coming days, Irish finance minister, Brian Lenihan, has said the total is unlikely to exceed £85 billion.

The UK and Sweden have also offered direct loans to Ireland.

“T2 was designed and built not just for this year or the next, but for many decades into the future,” he said following a ribbon cutting ceremony.

“To view it through the prism of the current downturn would be short-sighted in the extreme.”

The Taoiseach went on to describe the new terminal as a key infrastructural investment.

“By investing prudently in improved facilities, we are laying the foundations for future growth and prosperity; not just for Dublin Airport, but also for the wider Irish economy,” he added.

Despite the optimism among Irish leaders, huge challenges remain.

The completed project was three times over budget and two years behind schedule.

It was built for an airport handling 12 million passengers a year but industry insiders argue it will be lucky to see half that.

The Dublin Airport Authority (DAA), the state body that owns the facility, has been saddled with huge debts to finance the project and is facing claims by unpaid subcontractors, many of whom staged a protest at the airport on Friday. 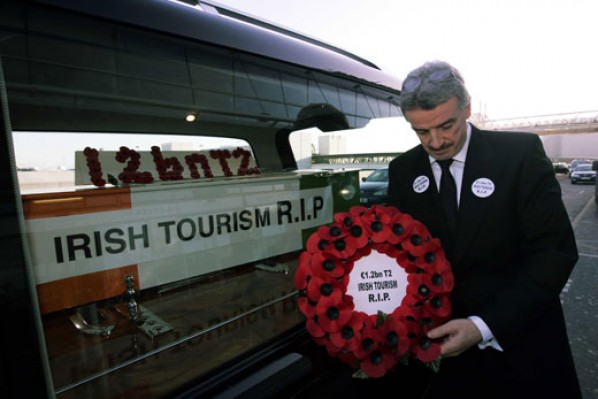 Ryanair has been highly critical of the development

Ryanair chief executive Michael O’Leary has been among the leading critics of the project.

He said: “The opening of the DAA’s €1.2 billion T2 white elephant officially marks the death of Irish Tourism.

“It is fitting that this unnecessary Taj Mahal will now become the welcome lounge for IMF officials at Dublin Airport.”

Ryanair has continued to argue the failed DAA airport monopoly must, branding it “unfit for purpose”.

Locals fear the airport may see an increase in demand, however, as young Irish workers seek to emigrate to more prosperous climbs in the United Kingdom, United States and Canada.

Hope for the Future

There are bright spots for the Irish economy.

The new terminal will create 1,000 new jobs, while it will welcome leading carriers; including to Aer Lingus, American Airlines, Continental Airlines, Delta Air Lines, Etihad Airways and US Airways.

T2 will also house a new US preclearance facility that will allow passengers on US bound flights clear all customs, immigration, agriculture and security checks before leaving Ireland.

The Dublin preclearance facility will open in the New Year and US carriers will transfer into Terminal 2 to coincide with this timeframe.