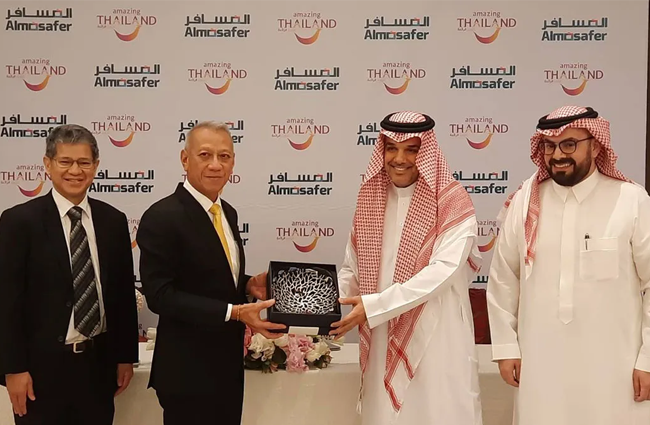 The Tourism Authority of Thailand (TAT) is strengthening Thailand’s presence as the preferred tourist destination among Middle East travellers to drive interest in returning to Thailand in the post COVID-19 situation. This has come about through the recent participation in the Arabian Travel Market (ATM) 2022, latest partnerships with Qatar Airways and Almosafer – one of the region’s top three largest online travel agents, and a number of marketing and promotional activities.

TAT led a Thai delegation that included 18 hotels, three hospitals, two travel agencies and one theme park to participate in the ATM 2022, held on 9-12 May, in Dubai, United Arab Emirates. Across the four-day event, the Thai delegation had on average 128 business appointments each, or over 3,000 sessions combined. This is expected to boost tourism from the Middle East market to Thailand, and generate about one billion Baht income for 2022.

Mr. Chattan Kunjara Na Ayudhya, TAT Deputy Governor for International Marketing – Europe, Africa, Middle East and Americas, said, “The interest in returning to Thailand is on the rise, and this is certainly a sign that the market was recovering quickly after the COVID-19 situation. Thailand’s focus at the ATM 2022 was on doing business with the upper market segment, such as families, medical treatment groups, and the new sector of women travelling on their own for shopping, beauty treatments, and other such activities.”

At the ATM 2022, TAT cooperated with Qatar Airways in launching a special sales promotion aimed at boosting travel to Thailand from mid-May to June 2022, among travellers from Saudi Arabia, Qatar, and Kuwait. The two parties were also in talks on partnering in a global campaign to encourage travellers from Europe attending the 2022 FIFA World Cup from 21 November-18 December to visit Thailand after the competition. A memorandum of cooperation on this is expected to be signed in October.

Meanwhile at the ATM 2022, TAT introduced a tourist promotion campaign in cooperation with the Dubai Police Privilege Card or Esaad Card, a loyalty programme for government employees under the Dubai Police. Special discounts on goods and services at over 300 locations in Thailand – predominantly hotels, hospitals, spas, department stores, and tourist attractions – will be on offer to 240,000 Esaad cardholders.

During the last week’s mission to the Middle East, TAT also took the opportunity to enhance its presence in the Saudi Arabia market through the signing of a memorandum of cooperation (MOC) with Almosafer, the largest online travel agency (OTA) in Saudi Arabia and Kuwait, as well as one of the top three largest OTAs in the Middle East and Northern Africa.

The agreement between TAT and Almosafer is to boost tourism between Thailand and the Gulf Cooperation Council (GCC) countries. The main goal is to promote and develop quality tourism experiences in Thailand for visitors from the GCC with a focus on key niche markets like sports tourism, luxury tourism, and health and wellness tourism. Thailand is a popular destination among GCC travellers, particularly those from Saudi Arabia and Kuwait where it ranks in the top five and top nine international destinations, respectively.

The signing of the MOC between TAT and Almosafer comes after 9 March, 2022, when Saudi Arabia began to allow its nationals to once again visit Thailand. Almosafer said since then it had experienced a huge growth in interest for travel to Thailand from Saudi Arabia with searches for Thailand’s tourism information on its website up over 470% from January 2022, and up over 1,100% in the first two weeks of May when compared to the first quarter of 2022.

Before the COVID-19 situation, more than 533,000 tourists from the Middle East visited Thailand each year, generating over 41.3 billion Baht in tourism revenue. Travellers from the Middle East are considered among the most high-spending groups with an average trip expenditure of 75,000 Baht per person. Normally travelling in a large group of family, they usually visit Thailand during July and August. From the region, the largest source markets to Thailand are the UAE, Kuwait, Bahrain, and Qatar.