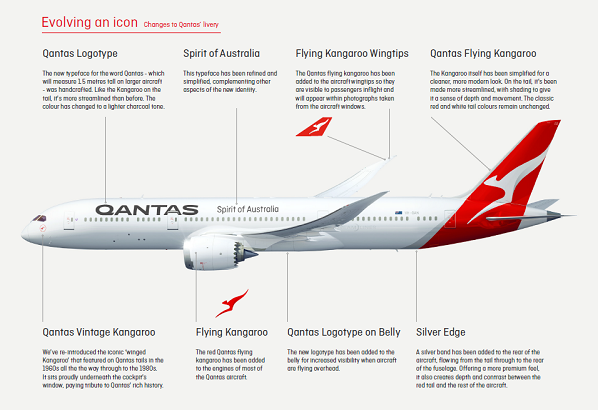 The new Dreamliner from Qantas

Qantas has unveiled what customers on-board its flagship Dreamliner 787-9 can expect when the aircraft arrives in a year’s time.

The Qantas Dreamliner will seat 236 passengers across business, premium economy and economy cabins in a layout that has been designed to maximise comfort for the longer distances the 787-9 is expected to fly.

The business suite is the next generation of the very popular seat recently installed on Qantas’ Airbus A330 fleet.

These suites are known for providing a high level of privacy, made more flexible on the 787 with the ability to now adjust the divider between each seat.

The suites also have a fully-flat bed and offer plenty of space to eat, work or relax.

Laid out in a one-two-one configuration, each suite has direct aisle access as well as the ability to stay reclined during take-off and landing.

Economy passengers will also have more room – including an extra inch of seat pitch compared with the national carrier’s A380 – and an all-new seat.

It features a new personal device holder and USB ports; more storage areas; a seat-back mood light designed to minimise disturbance for other passengers; and a high-definition entertainment touchscreen that is five per cent larger.

The seats also feature an updated version of the popular Qantas ‘footnet’ first introduced on the A380, designed to cradle the legs during sleep.

Unveiling the business and economy seats in Sydney, Qantas Group chief executive Alan Joyce said the interiors had been carefully designed with longer routes and changing passenger preferences in mind.

“The Dreamliner is an aircraft built for comfort.

“The windows are bigger, it helps reduce jetlag, it’s extremely quiet and there’s a system that smooths out turbulence.

“Customers are going to love it,” said Joyce.

“We’re planning to make the most of the 787’s amazing range, so we’ve designed the cabin to give Qantas passengers a better experience on long haul flights.

“Many of the cabin design elements reflect what our customers have told us.

Detail on initial Qantas Dreamliner destinations will be revealed in coming months, with the first international flights on sale before Christmas.

The aircraft will gradually take over routes currently operated by the airline’s B747 fleet as well as adding new city-pairs to the Qantas International network.