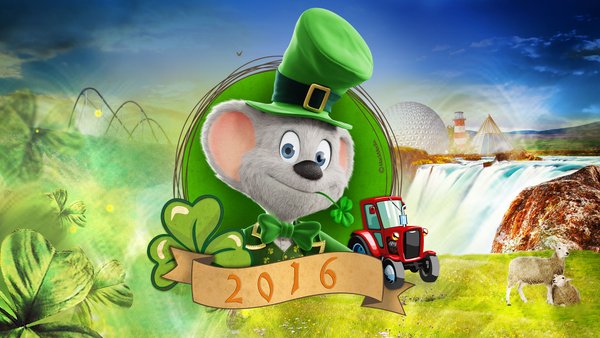 Europa Park is about to begin the 2016 season with a focus on families.

A new themed area, Ireland – Children’s World, will play a key role in the park’s offering this year, when it opens in late spring.

Home to numerous attractions, it will welcome a large indoor play area and a range of new culinary delicacies, and is expected to be the highlight of the new season.

With authentic, detailed design, visitors of all ages will be able to discover the most beautiful side of Ireland.

The park is home to more than 100 attractions and shows, while 14 European themed areas await visitors on a site measuring 95 hectares.

Visitors can once again expect many great surprises and innovations this season.

And so, between the French and English themed areas, the existing Children’s World will be given a new theme from late spring 2016 in the form of the Emerald Isle.

For those visitors looking to accompany the Wünschmann family on their ludicrously spooky adventure, Pegasus Coastiality will take them through the eerily funny world of ‘Happy Family’ equipped with innovative technology virtual reality glasses.

As the world premiere of the first virtual reality rollercoaster Alpenexpress Coastiality caused a stir among visitors and in the media last year, this year the popular YoungStar Coaster in the Greek themed area becomes the second rollercoaster at Europa-Park to be conquered by virtual reality.

The activity area nestled in the heart of the Europa-Park is also getting a new landmark with the addition of the new Luxembourg Square as part of the Luxembourg Festival in June.

Investments are also being made in behind-the-scenes operations of Germany’s largest theme park.

A new Logistics Centre, which is responsible for all commodity flows in the park, is being built on the site of the former staff car park.

Not only that, but a fish ladder is being built at the river Elz to allow fish to migrate upstream.

Finally, a new multi-purpose hall will be built over the course of the year, which in future, will host not only trade fairs and conferences, but also concerts and other events.

It will be replacing the Europa-park Arena and provide even more improved protection against noise pollution thanks to its design.

For more than ten years, the Europa-Park has been welcoming visitors in four wonderfully decorated seasons.

Spring is the time to introduce what is new, then the summer season promises refreshing water attractions and adventurous ways to cool off.

Europa Park is open to guests from tomorrow, March 19th.