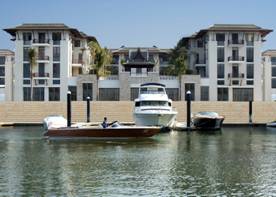 An up market shopping ‘retail-tainment” complex, ‘Horizons,’ is incorporating international designer brands as well as a gourmet supermarket, delicatessen and boutique bakery, and a wide range of high quality boutiques and stores specializing in fashion and beauty, gifts and home décor, sports and leisure, and boating and marine supplies.

The resort-style community is located on Phuket’s eastern seaboard in Phang Nga Bay - only minutes away from an international college and hospitals, spectacular golf courses and Phuket Town.

Over one hundred tropical and exclusive white, sandy beaches as well as countless islands in spectacular Phang Nga Bay (including the famous James Bond island), Krabi and Phi Phi are only a short cruise away. Speedboat shuttles link residents to an exclusive private beach club on a nearby tropical island.

Royal Phuket Marina is the brainchild of telecom tycoon Gulu Lalvani, founder of Binatone, the world’s second largest manufacturer of digital cordless phones.  The 65 year-old mogul, one of the original holiday-home residents of Phuket’s legendary Amanpuri resort, came out of retirement to realise his marina dream after persuading the Thai government to abolish a 200 per cent import duty on imported boats that had brought the marine tourism industry to a standstill.

Mr. Lalvani made a personal pledge to Prime Minister Thaksin that, “if taxes were reduced, [he] would give [his] word that [he] would develop a world class marina.”

The result is Asia’s most sophisticated and high-tech yachting infrastructure. The marina is raising the bar with technological advances and new standards of safety, both in Phuket and the region, with a deepwater basin and private moorings on the doorstep of residences, it is the first in this region and berth take up is unprecedented.

Mooring and marina costs are much more affordable than comparable marinas in Asia, such as Singapore or Hong Kong, or Europe and the Caribbean. Fuel is 75 per cent less than Europe and 60 per cent less than Hong Kong. Crew costs are dramatically lower. “This is a significant advantage for Thailand over established marine centres,” said Mr Lalvani.

The first boats have already started arriving at their moorings, with the first condominiums ready for occupancy in September 2005. The official opening of the first phase of Royal Phuket Marina is scheduled for early December 2005. The entire project is due for completion in 2007.

With foreign freehold ownership of condominiums and villas now possible in Thailand, residences are being snapped-up by investors, including a large number of Hong Kong buyers.

Residences are being purchased both as homes in Thailand and holiday homes for rental purposes, with professional management maximizing returns.

Purchases secured during the development stage are made when “the upside on investment is at its highest”, say the developers. The property managers are CB Richard Ellis (Thailand), managers of many of the world’s largest and most prestigious developments.

Royal Phuket Marina is already being positioned as an international brand and the developers are “confident that owners will see impressive capital appreciation in a short time frame”.

“We are committed to making Phuket the most powerful luxury tourism centre in Asia,” added Mr Lalvani.
——-