World Travel Market (WTM), the global event for the travel industry, has set new records marking its 25th anniversary. This year’s exhibition expanded to more than 5,000 exhibitors from over 190 countries, reflecting a general recovery and sense of optimism in the marketplace.According to Fiona Jefferey, WTM has always mirrored ups and downs of the industry. This year WTM witnessed a 4% growth from last year.

“I am delighted that World Travel Market has marked its silver anniversary with a truly outstanding event exceeding all records in terms of exhibitors, visitors and business conducted,” said Fiona Jeffery, Group Exhibition Director, World Travel Market. “This is a reflection of the recovery within the industry after three very difficult years after 9/11.”

The WTM global report unveiled on Monday reported a rapid global increase in tourism with world-wide arrivals rising 12 per cent to around 526million in the first eight months of 2004, compared with the same period last year.

The Asia Pacific region recorded the most impressive growth, up 37 per cent to 99million arrivals and the most popular European destinations to visit were the new EU and future EU members, such as Turkey, Bulgaria, Croatia, the Baltic States, Slovakia and Poland.

As airlines continue to suffer following the sharp increase in jet fuel, there was only a small presence from the airlines at the WTM with no show from the major US carriers.

According to the International Air Transport Association (IATA) airline losses are set to exceed $4 billion in 2004. IATA said the cost of aviation fuel, which rose to over $50 a barrel, will lead to members losing more than the $3-$4billion estimated earlier this year.  Airline industry costs are currently running at $10 billion over 2003 levels. 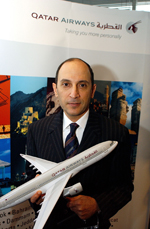 Contrary to belief, Middle Eastern Airlines are not exempt from the fuel surcharges. During a press conference, Akbar Al Baker, CEO, Qatar Airways revealed:“Being part of an oil rich state does not mean that we depend on charity. There is a monopoly here and we are not getting any favours”.

Regardless of the high fuel costs, and in contrast to the rest of the world, business for airlines in the Middle East is booming. This was reflected by the impressive stands displayed by Qatar Airways, Gulf Air and Emirates.

As a mark of respect for the loss of His Highness Sheikh Zayed bin Sultan Al-Nahyan, Ruler of Abu Dhabi and President of the United Arab Emirates, Etihad did not exhibit at WTM.

This year’s conference was chosen as the platform to display several new innovative and ambitious products. Gulf Air were exhibiting their new flatbed seat which is part of their new ‘for business’ strategy. John Butler, Vice President, Marketing & Sales, Gulf Air commented:“This is a key trade show to deliver our latest products and services. This is our 3rd year exhibiting and each year we bring a new service to the forum”. 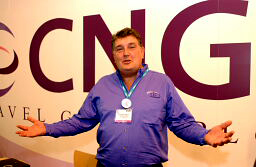 Several new partnerships were signed and announced during WTM. Just 2 days into the show, CNG Travel announced a partnership with Corporate Travel
Findarr Power, CEO, CNG Travel told ITN: “The show from a CNG perspective has been excellent. The last two days have been very busy. We have attracted both on the supply side as well as on the demand side. This has presented a forum where we could conclude old deals and create new ones. I would have to say that I give WTM an A so far”. 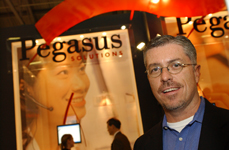 There was a real sense of real optimism among exhibitors this year.
Michael R O’Connell, Director Business Partner Programs, Pegasus Solutions, commented: “We have had a great time at the show. There has been a lot of traffic during every day of the show. We have done a lot of business here and it has been very successful. We have signed some new partnerships in Eastern and Central Europe. It is great to be here and meet with those people”. 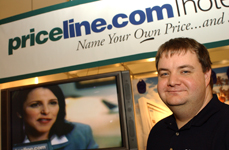 Priceline.com chose the WTM as a platform to demonstrate their growing portfolio, following their purchase of Travelweb and Active Hotels. Stephen Linger, Regional Manager, Europe, Priceline, commented: “This is the first time that we have had a booth at WTM and it has been very successful. We’ve made some fantastic contacts here and are already booked to come back next year”.

Dan Smith, Sales Director, Active Hotels commented: “The atmosphere this year was dramatically more positive than last year and visitor numbers were appreciably up.  There was also considerable optimism for the year ahead, both for hotels and the on-line travel sector” 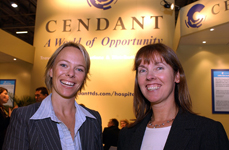 The main message from exhibitors was that the WTM had delivered a meeting forum where valuable new leads had been created. Alison Bell, Regional Director,  UK& Ireland, Cendant Travel Distribution Services, commented: “WTM was a highly productive networking opportunity to see stakeholders and suppliers under on roof
——-