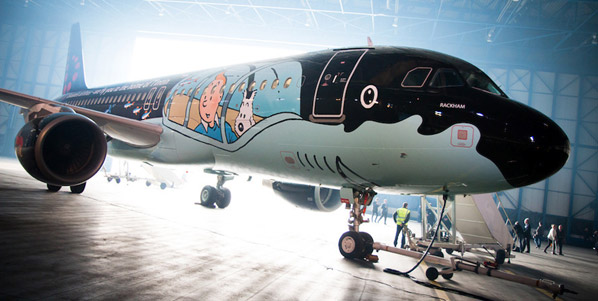 Brussels Airlines and Moulinsart have unveiled something never seen before: an Airbus A320 with a livery inspired by the Belgian cartoon character Tintin.

Both Belgian companies have worked several months on this unique project, based on the original drawings by the hand of Hergé.

In the presence of the plane spotters and VIP guests, Brussels Airlines and Moulinsart have presented the aircraft livery they have secretly been working on for several months.

The result is a 37 metre long black shark, based on Professor Calculus’ shark submarine from the Tintin adventure, Red Rackham’s treasure.

The aircraft was baptized ‘Rackham’.

Brussels Airlines wants to be a proud ambassador for Belgium.

The airline wants to promote the many Belgian talents to the world, just as it does for the Belgian gastronomy with its Belgian Star Chefs program, its large offer of Belgian products on board its flights, its partnership with the Belgian national football team The Red Devils and the world’s largest music festival Tomorrowland.

Tintin, the historical Belgian character created by Hergé, who travels the world on adventurous quests, is the perfect travel partner for Brussels Airlines.

Never before has the legacy of Belgian cartoonist Hergé been translated onto the fuselage of an aircraft. 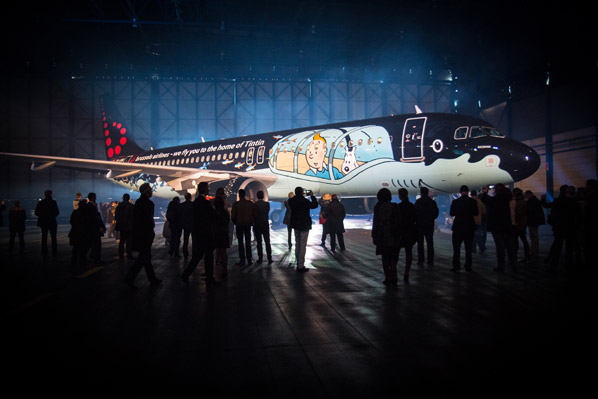 Hergé himself was fascinated by planes, they are the most used means of transportation in the Tintin oeuvre and they were always drawn with great technical precision.

For the painting of the aircraft, Brussels Airlines worked with aircraft paint artist Andre Eisele, who had the challenging task to adapt the perspective of the drawings prepared by Moulinsart’s graphic designers to the unusual curves of an aircraft fuselage, to get as close to the original shark submarine design as possible. 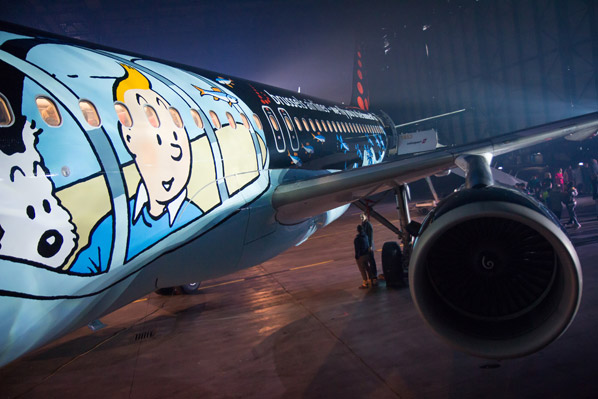 “This aircraft is a dream come true.

“The partnership with Brussels Airlines is a perfect marriage for us.

“Tintin is all about Belgium, all about Brussels, where he was born, as was Hergé.

“Tintin is also all about adventure and travelling, and with this plane we bring our two worlds together perfectly,” said Nick Rodwell, director Moulinsart.