New York mayor Michael Bloomberg has unveiled plans to transform the waterfront on Staten Island with the construction of the world’s largest Ferris wheel.

The New York Wheel will be built just to the north of the ballpark and be 625 feet tall – 84 feet higher than the Singapore Flyer, currently the tallest Ferris wheel in the world.

The New York Wheel will be comprised of thirty-six capsules, each able to carry up to 40 passengers with a max capacity of 1,440 people per ride.

The wheel is expected to welcome as many as 30,000 riders per day during peak season and an estimated 4.5 million visitors per year.

The mayor also announced plans by BFC Partners to construct Harbor Commons, a 350,000-square-foot retail complex featuring 100 designer outlet stores and a 120,000-square-foot hotel on the site to the south of the ballpark.

Together the projects will generate a $480 million private investment, and create over 1,200 construction jobs and 1,100 permanent jobs. 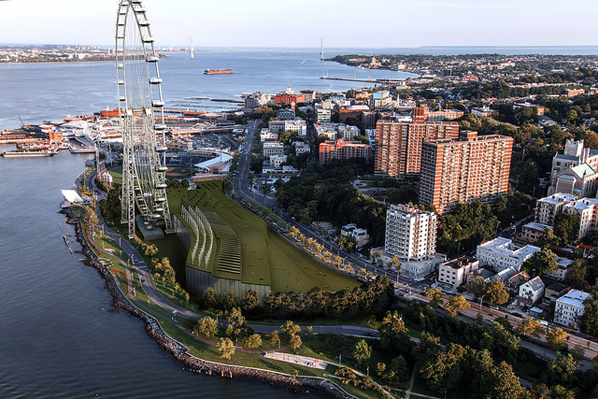 “Our Administration has made major investments all along the North Shore of Staten Island, because we know this area is full of potential for economic growth,” said mayor Bloomberg.

“It will offer unparalleled and breathtaking views, and is sure to become one of the premier attractions in New York City and the latest exciting addition to our newly revitalised waterfront.” 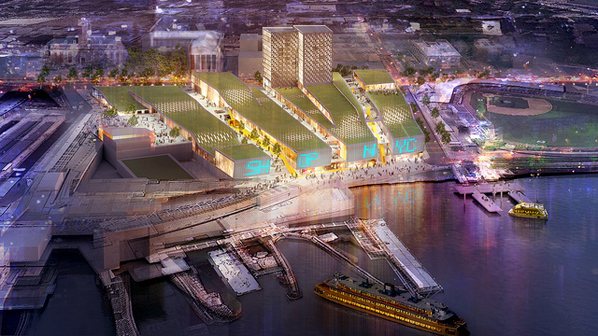 The two development sites are located steps from the Staten Island Ferry in St. George, and are currently used as parking for the Richmond County Bank Ballpark and the St. George Ferry Terminal.

At the base of the Wheel will sit a 100,000-square-foot terminal building, which will include various commercial uses, such as retail, restaurant, and theatre space, as well as exhibitions about New York City history, alternative energy and environmental sustainability.

Construction plans for the Wheel and terminal building will strive for Platinum LEED certification, the highest rating of sustainable building.

Both New York Wheel and BFC Partners will enter into 99-year leases.

Combined the two parties will pay $2.5 million per year in rent to the city, with additional participation rents once certain ridership and gross revenue milestones are reached.