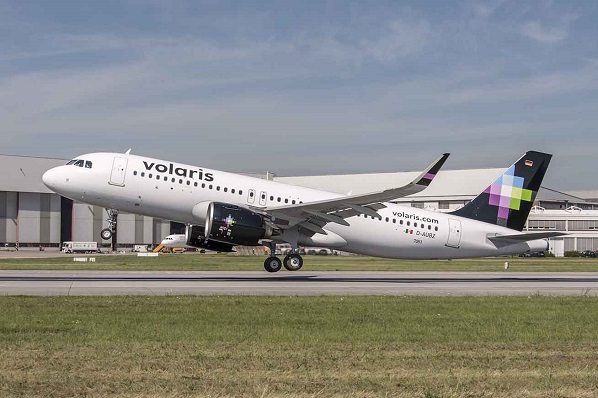 Low-cost carrier Volaris has taken delivery of its first A320neo, making the airline the first operator of the A320neo in North America.

Volaris is Mexico’s largest Airbus customer, having ordered 74 A320 Family aircraft, including 30 A320neo.

The A320neo for Volaris is powered by Pratt & Whitney Pure Power PW1100-JM engines and leased through AerCap.

“The arrival of the A320neo symbolises an important step in our ambitious ultra low-cost strategy,” said Enrique Beltranena, chief executive of Volaris.

“Volaris is delighted to be the first to bring this new technology to passengers in North America.”

The A320neo Family is the world’s best-selling single aisle product line with nearly 4,800 orders from 87 customers since its launch in 2010 capturing some 60 per cent share of the market.

“Airbus is honoured to deliver the first A320neo in North America to Volaris, an all-Airbus operator for more than ten years,” said Rafael Alonso, president, Airbus Latin America and the Caribbean.

“Mexico’s strong economic growth presents a key opportunity for the country’s top airlines such as Volaris to expand and remain environmentally efficient, and the A320neo will be exceptional in achieving this for Volaris.”