THAI Airways president Piyasvasti Amranand has called on the Pacific Asia Travel Association (PATA) to help make it easier for Thai nationals to get tourism visas.

Addressing 120 public and private sector travel industry executives at PATA Hub City Forum in Bangkok yesterday, he said, while e-visas were discussed at Davos, there were many small things destinations can do to help Thais travel to Europe.

Piyasvasti praised destinations that had no visa or streamlined tourism visa facilities.

“I think it is why we see so many Thais now going to Korea,” he said, “I think PATA should do more to get governments to ease the visa situation.”

In his speech - “Navigating the Headwinds” - Piyasvasti told the audience that THAI had a nine-point strategy for development and growth.

The airline will take delivery of its first A380 in October. 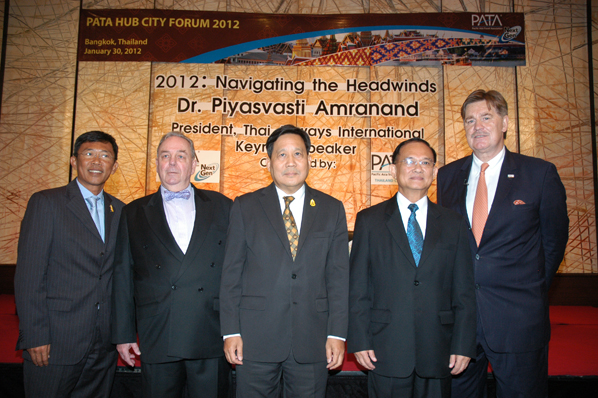 The THAI also president lamented the aviation industry’s commitment to reduce carbon emissions by 50 per cent by 2050 as “ridiculous” given that aviation accounts for only two per cent of global CO2 emissions.

He described the Emission Trading Scheme recently implemented by the European Union as “unfair”, as it was calculated from point of origin and would therefore badly impact long haul carriers flying to Europe.