The news was announced at the Arabian Travel Market.

The new development will feature a Presidential Villa, 80 luxury villas with private pools, 80 furnished hotel apartments, and 130 hotel rooms facing the Indian Ocean, many of which have their own private ‘sky pool’.

The property will also unveil the largest luxury ballroom in Salalah, as well as retail outlets and two specialty restaurants.

A resort of this standard is a first for Salalah and is expected to enhance the tourism landscape of Oman’s second largest city.

Construction will begin in the fourth quarter of 2012 and the resort is expected to open in 2016.

SHAZA HOTELS chief executive, Simon Coombs, explained: “We are proud to announce the signing of SHAZA SALALAH and bring SHAZA’S vision to the Sultanate of Oman, especially to Salalah.

“Shaza Salalah will be a resort that is married with nature and will be a window for the world to experience the best of Salalah – which is one of its kind in the entire Arabian Peninsula.

“We are also very proud to have found the right partners for this luxury resort development.

“We believe Taameer Investment have the vision and the development experience to see this resort to fruition and bring the world to Salalah.” 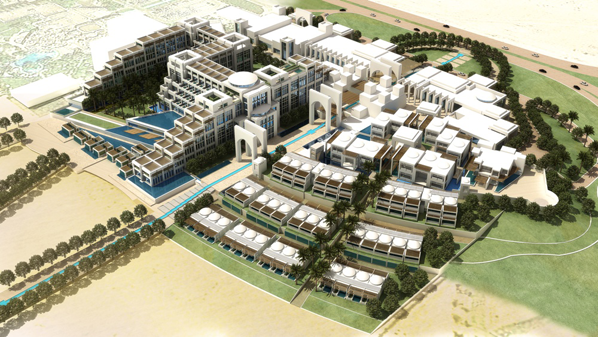 The new development, which is centred on privacy, the natural landscape of Salalah, and the architectural heritage of the coastal city of Oman, will target families, honeymooners, and the luxury travellers.

SHAZA SALALAH is the first beach resort development to be announced by SHAZA HOTELS following hotels already in operation in Medina and Sarajevo while developments in Marrakesh and Karbala are in construction.

Since its launch, the SHAZA HOTEL brand has shown considerable interest from investors and developers for its unique concept, and was voted as the Middle East’s Leading New Hotel Concept at the World Travel Awards Middle East Gala Ceremony.