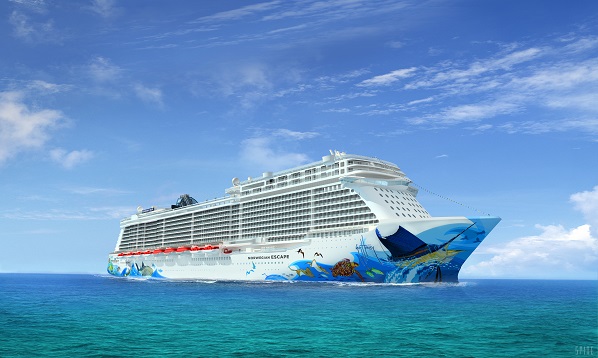 Norwegian Cruise Line has announced the seasoned captains and senior officers who will serve on Norwegian Escape, the line’s newest and largest ship that will homeport in Miami year-round beginning in November 2015.

Captain Evans Hoyt, an experienced seafarer, with more than 30 years at sea will take the helm of Norwegian Escape upon delivery of the ship in Germany this October.

Currently serving as captain of Norwegian Breakaway, Hoyt will be responsible for all aspects of the ship, her guests and crew.

He joined Norwegian Cruise Line in 2005, and has also served as captain aboard four ships within the Norwegian fleet, including the US flagged Pride of America.

Hoyt graduated from the US Merchant Marine Academy in New York in 1982.

Born in Morocco, the son of a US diplomat, he has lived in many different countries.

Showing his true passion for the sea, he and his wife sail the world on their sailboat during his time off.

While captain Hoyt is enjoying his vacation, captain Gunnar Hammerin will take command of Norwegian Escape.

Currently serving as captain of Norwegian Pearl, Hammerin began his nautical career more than 40 years ago serving in the Merchant Marine.

He has more than 30 years of experience as a captain, 20 of those years with Norwegian Cruise Line and Star Cruises.

Staff Captains Robert Lundberg and Preston Carnahan will be on board to introduce the vessel to guests during her very exciting inaugural season.

As staff captains, they are second in command and report directly to Norwegian Escape’s captain.

They are responsible for the deck department and are versed in all of the responsibilities and duties of the captain.

The staff captains will also assist Norwegian Escape’s captain with all operations, including being responsible for the safety of guests, crew, the ship and the environment.

Lundberg joined Norwegian in 2006 and since has served as chief officer on Norwegian Breakaway and staff captain on board Norwegian Getaway.

Carnahan joined the company in 2003 and has held positions on several ships, including Norwegian Pearl and Pride of America.