Norwegian Cruise Line (NCL) has kicked off its 2022 Alaskan cruise season with Norwegian Bliss from Port of Seattle. This is the first ship to visit Alaska this season, as well as the first of five the group’s vessels to cruise the Last Frontier through October 2022.

The vessel will provide travellers with immersive experiences through Southeast Alaska, visiting natural wonders including the passage through the 25-million-acre World Heritage Site, Glacier Bay National Park. NCL was granted access to this natural wonder due to the company’s environmental commitments focused on air emissions, waste and wildlife protection. Other once-in-a-lifetime sites guests may visit include the majestic Mendenhall Glacier, which lies nearly 12 miles outside Juneau, Alaska and the Misty Fiords National Monument near Ketchikan, Alaska, a glacier-carved wilderness featuring snowcapped mountains and waterfalls.

NCL has a long history of cruising from Seattle to Alaska, having pioneered the route in 2001. The company is deeply committed to the region working with destination partners in Seattle and Alaska to drive immersive and responsible tourism. In conjunction with Port of Seattle, NCL Holdings, NCL’s parent company, invested $30 million to upgrade Pier 66, the renowned site where Norwegian Bliss was christened in 2018. The dual investment expanded the check-in area by 300 percent to more than 150,000 square feet. It also expanded two new passenger boarding bridges to provide a more comfortable and efficient embarkation process.

Harry Sommer, President and Chief Executive Officer, Norwegian Cruise Line said: “We have nearly three decades of history cruising Alaska, pioneering voyages to the Last Frontier from Seattle more than 22 years ago and christened the largest cruise ship in Seattle in 2018 with the debut of Norwegian Bliss. We could not be any prouder to return to our ‘second home’ and jumpstart the 2022 Alaska season with one of our most innovative ships and provide unforgettable guest experiences with some of the world’s most bucket list destinations.”

Driving economic support in Alaska, the company partnered with and invested in Ward Cove Dock Group, transforming land, formerly designated as a superfund cleanup, or contaminated land, by the Environmental Protection Agency (EPA), into a sustainable, environmentally friendly and entertaining site for the community and cruise visitors.

Through a partnership with the Alaska Native-owned Huna Totem Corporation, The company was able to complete a second cruise pier at Icy Strait Point, as well as expand the destination’s Wilderness Landing. Enhancements featured upgraded retail, and restaurants, as well as shore excursion offerings, including the world’s largest ZipRider zip line, and experiences highlighting the culture of the native Huna Tlingit people.

In 2021, as part of NCL’s Great Cruise Comeback to celebrate the restart of its operations, the brand restarted its U.S. voyages from Seattle to Alaska making its first call to Icy Strait Point and also officially welcoming the opening of the new Wilderness Landing pier and the first of two gondola systems to be completed as part of the joint investment between NCLH and Huna Totem. 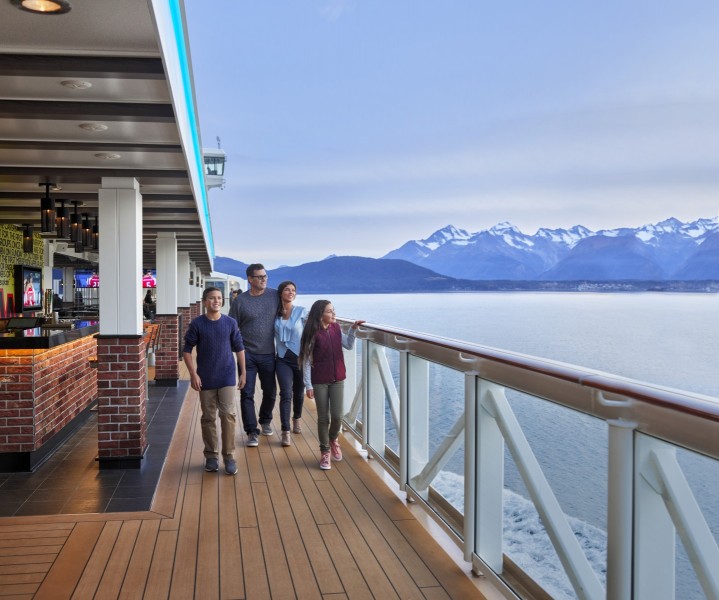