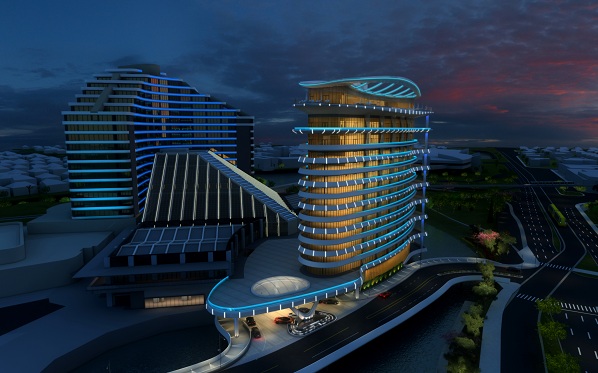 A transformed Jupiters Hotel & Casino will enhance the Gold Coast’s reputation as one of the world’s top tourist destinations when the global spotlight shines on the region in 2018, according to Echo Entertainment chairman, John O’Neill.

At a ground-breaking ceremony for the new six-star 17-storey hotel tower to be built in front of the existing hotel, and completed in time for the 2018 Commonwealth Games in Australia, O’Neill said the development would make the Gold Coast and Queensland justifiably proud.

“We are committed to positioning Jupiters as a world-class integrated resort and assist in the exciting transformation of the Gold Coast before, during and after its hosting of the 2018 Commonwealth Games,” O’Neill added.

“Our six-star hotel tower has a construction completion date that will ensure its readiness for the Commonwealth Games.

“The tower will offer new levels of luxury and only the best in finishes and amenities, not to mention six-star service.”

Construction of the first six-star hotel to be built on the Gold Coast in more than 15 years will also be undertaken by an industry-leading Australian-based company, it was announced.

Probuild is the successful tenderer for the construction of the new all-suite tower and gaming facilities at Jupiters.

“This project is a celebration of the Gold Coast,” said Bekier.

“These are exciting times for the Gold Coast and we’re delighted to be playing what we believe will be a key role in advancing the growth of tourism and jobs creation in the region.”

The new tower forms an integral part of the property’s transformation and further highlights Echo Entertainment’s commitment to continued investment in south east Queensland, having been announced last month as the preferred proponent to redevelop Queen’s Wharf Brisbane.

The complete redevelopment project at Jupiters will create some 1,700 temporary and permanent jobs during its life cycle.

Hogg provided further detail on the tower, saying some suites will boast three or four bedrooms and each will embrace the best of the Gold Coast, with large balconies and captivating city views. An exclusive, high-end lounge bar will also overlook the infinity edge pool

“The Gold Coast’s reputation as a must-visit destination continues to strengthen with both leisure and business travellers, so we are working to create a broad offering that will help to support this well into the future,” he said.

“We are also creating spaces that cater to the specific needs of individual travellers with some suites to include home offices, extra family rooms, theatres or even private karaoke parlours.

“Suites will also be equipped with digital signage, allowing guests the flexibility to change in-room information into many different languages.

“We are also working on six-star room service, to allow guests to order from any restaurant across the property, or one of the new restaurants, and enjoy dining on their balcony overlooking the Gold Coast skyline.”