Luxury hotel brand Jumeirah has reported a strong growth in sales, led by a surge in occupancy rates across its Dubai portfolio this year. The group has also unveiled plans to launch a new lifestyle brand, VENU Hotels, later in 2010 as its global expansion continues apace.

Jumeirah’s Dubai beachfront properties – which include the Burj al Arab, Jumeirah Beach Hotel and the Madinat Jumeirah – registered occupancy of 92.5 percent in April and an average of 89 percent in February and March.

The strength of the business travel market was particularly encouraging, with Jumeirah Emirates Towers recording occupancy of over 75 percent for the February-March 2010 period, as the emirates rebounds strongly from last year’s financial crisis.

Gerald Lawless, Executive Chairman of Jumeirah Group, said: “The high occupancy rates recorded at our hotels confirms that Dubai has maintained and consolidated its place as the preferred destination for discerning travellers.” 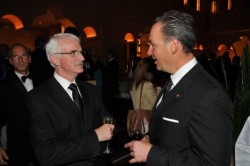 Outside Dubai, Jumeirah’s Essex House in New York has secured average occupancy rates of 85 percent during April, with strong business on the books for the late spring and summer seasons. Its London properties – Jumeirah Carlton Towers and Jumeirah Lowndes Hotel – showed a similar strength in performance.

New lifestyle brand
Jumeirah’s new contemporary lifestyle brand, VENU Hotels, will be launched later in 2010 as a key element in its global expansion programme, which includes a goal of opening 30 hotels by 2013.

The company has yet to confirm the locations of its first set of hotels, but says it is in advanced negotiations with developers interested in opening VENU branded hotels in the Middle East, Northern Africa, Eastern Europe and Asia-Pacific.

Gerald Lawless said: “VENU Hotels will, when launched, fulfil a clear market need and one that is highly complementary to the Jumeirah Hotels and Resorts brand. We are looking forward to a busy and exciting period opening new hotels, attracting new guests and introducing a new hotel brand concept to the world.”

Global expansion
Jumeirah Hotels was founded in 1997 with the aim to become a hospitality industry leader through establishing a world class portfolio of luxury hotels and resorts.

It currently operates 11 Jumeirah Hotels and Resorts worldwide, with a further 32 management agreements in place to run hotels in key locations across the world. The company expects to open at least 10 new hotels within the next 18 months including Jumeirah Frankfurt, Jumeirah Messilah Beach in Kuwait, two hotels in the Maldives, Jumeirah Etihad Towers in Abu Dhabi, as well as properties in Al Ain, Dubai and Shanghai.