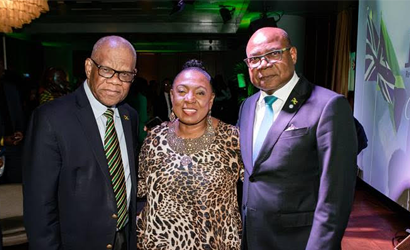 His Excellency Mr. Seth George Ramocan, High Commissioner for Jamaica to the United Kingdom, the Hon. Olivia Grange, Jamaica Minister of Culture, Gender, Entertainment and Sport, and the Hon Edmund Bartlett, Jamaica Minister of Tourism, pictured at the official launch of Jamaica 60 celebrations in the UK.

Jamaica has formally launched the start of activities to mark the island’s 60th anniversary of Independence under the theme ‘Reigniting a Nation for Greatness’.

Minister of Tourism, Hon. Edmund Bartlett, and Minister of Culture, Gender, Entertainment and Sport, Hon. Olivia Grange launched the Jamaica 60 activities and confirmed the year would include a mix of exciting commemorative events and legacy projects.

Minister Bartlett said: “We are sixty. Sixty bold, brave years in which Jamaica and the Jamaican community has had an impressive impact on cultures around the world. We’ll be marking this anniversary with a year of cultural activity throughout the year making this the year to visit Jamaica. And we’ll also bring the celebrations to the UK with lots of activity around the Commonwealth Games in Birmingham this summer.”

“We’re delighted that our British visitor numbers are already getting back to pre-pandemic levels,” he said, “and our increased airlift and removal of Covid testing means we expect 2022 to be a true year of recovery. We expect to close 2022 having welcomed a total of 3.2 million visitors contributing more than three billion US dollars to our economy.”

Minister Grange said: “Our government has always taken the position that milestone celebrations such as Jamaica 60, must include projects that will benefit our country for generations to come. Among the legacy projects to begin this year are the redevelopment of the National Stadium, the establishment of a Jamaica Sports Museum & Sports Hall of Fame and the establishment of the Harry Belafonte National Concert Hall.”

Events and festivals planned for 2022 include:

Jamaica Rum Festival The Jamaica Rum Festival will be a celebration of Jamaica’s excellence in rum, art and music, with a mixture of virtual and in-person events in Montego Bay on Saturday June 2. Through live seminars, demonstrations and accompanied by live music, attendees will learn about the Jamaican rum process, the various types and the different ways it can be enjoyed in an interactive and enjoyable experience.

Bands and fetes are already gearing up for what will be Jamaica’s first summer Carnival. The Carnival in Jamaica has moved from its traditional April slot and will begin on July 1 and culminate in a grand road parade in Kingston on July 10.

Reggae Sumfest visitors will drench themselves in sound at Jamaica’s largest annual music festival which is acclaimed for performances from the best dancehall and reggae artists in the world, combined with tropical beach parties and street parties. This year Reggae Sumfest is being held in Montego Bay between 20 and 23 July and Shenseea has just been announced as its headliner. Outside the reggae scene, Shenseea is most well known for her collaboration with Megan Thee Stallion on ‘Lick’.

Jamaica is considered as the World’s Leading Family Destination by World Travel Awards.