Growth at Etihad Airways has been achieved by nothing more sinister than strong strategic planning, foresight and the excellent location of the United Arab Emirates at the gateway of the eastern and western hemispheres.

That is the view of Etihad chief commercial officer, Peter Baumgartner, who sought to quash some of the more extravagant rumours swirling around the airline earlier at the Australia Pacific Aviation Outlook Summit in Sydney.

Addressing a business audience, Baumgartner brushed aside what he terms “idle industry chatter” suggesting overheads at the airline were any lower than competitors.

In particular he was keen to dismiss accusations Etihad received subsidised fuel suppliers in its Abu Dhabi home.

Baumgartner highlighted the airline had fixed the price of three quarters of its jet fuel in 2010.

“I assure you, Etihad pays more to refuel its jets in Abu Dhabi than we do in Singapore or Amsterdam or Chicago,” he explained.

Another egregious claim Baumgartner sought to dismiss was the use of “slave labour” at the airline.
In Sydney he specified cabin crew employed by Etihad were paid the market rate, equal to that offered by rival carriers in the region.

He went on to explain front-line ground staff were paid up to four times the amount they would be paid for the equivalent job in their home countries, often in the developing world.

“We provide housing, medical insurance, education for children, and an array of other benefits and allowances,” added Baumgartner. 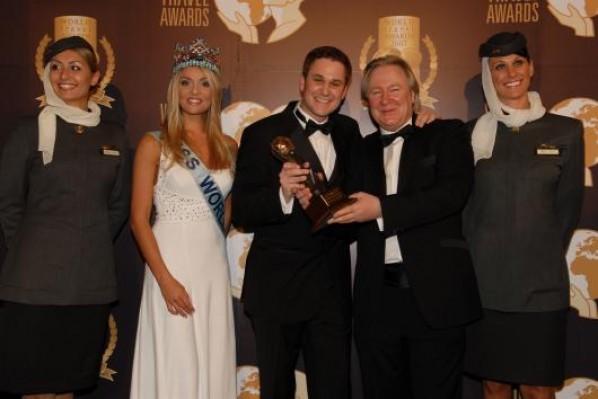 Etihad Airways was recognised as the World’s Leading Airline by the World Travel Awards in 2010, with Peter Baumgartner here seen receiving the trophy from founder WTA Graham Cooke

Rumours aside, Baumgartner was keen to focus on the positives.

Australasia – once the most isolated continent on earth – is now served by 45 international carriers, with Etihad seeking to cement its place as a leading player.

Etihad launched in Sydney and then Brisbane in 2007, Melbourne followed in 2009, with 15 per cent of available seat kilometres at Etihad now dedicated to Australia.

“We are a far more disparate and international program than many of our competitors’ schemes, which rely heavily on their domestic markets,”
explained Baumgartner.

“That is a reflection of our network’s diversity and, again, our place, geographically, in the world.”

Baumgartner also pointed to key alliances with Virgin Australasia and Air New Zealand as drivers of growth, suggesting Australasia would be a key battleground over coming years.

“Our goal is to be the best airline in the world and we’re determined to achieve that ultimate accolade, regardless of what our competitors say about us.

“Nor will we be distracted by them,” concluded Baumgartner.