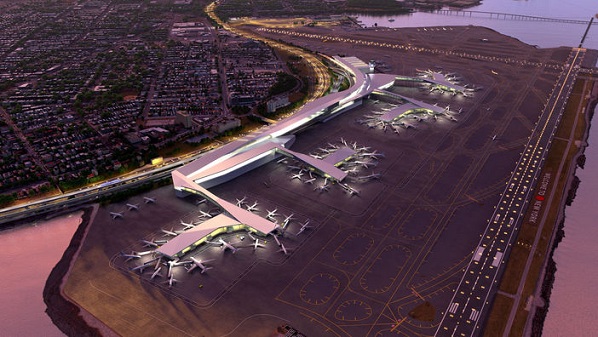 Rendering of upgraded LGA: “This is what New Yorkers deserve and have deserved for a long time,” Cuomo said at a luncheon hosted by the Association for a Better New York.

Delta operates a major hub at LGA, with about 275 daily departures from Terminals A, C and D; the airline will be a partner in the plans for the redesigned airport.

Cuomo praised Delta in his remarks, saying that the airline is “a great corporate citizen in New York.

“Delta has stepped up to the plate in a big way,” he continued.

Cuomo announced that the first part of the plan will begin next year and cost $4 billion, with about half of those costs covered by private funding.

In a release distributed by the governor’s office, Delta president Ed Bastian said: “Delta commends governor Cuomo on his airport reconstruction plan, which will transform not only the New York City travel experience but also the landscape of the city itself.

“Delta has invested more than $2 billion in infrastructure upgrades and passenger enhancements at our hubs at LaGuardia and JFK, and the initiatives announced today are aligned with our on-going commitment to providing an exceptional experience for anyone traveling through New York for business or pleasure.

“We look forward to working in partnership with the governor’s design commission on a comprehensive and complementary redevelopment plan that realises our mutual goals and benefits all New York passengers.”

The redesigned airport is the biggest part of a plan for four of the state’s airports in the New York area.

As part of that plan, Stewart Airport north of the city and Republic Airport on Long Island will receive start-up New York designations, offering opportunities to new and expanding businesses to operate tax free for ten years.

He also announced that the Saarinen building (formerly the TWA terminal) at New York-JFK will be reconfigured into a hotel.

According to the governor and vice president, the construction will add thousands of jobs and help grow tourism and commerce.

The proposed improvements to LGA would create better connections between terminals and a new roadway system, among other enhancements.

“LaGuardia and JFK are economic anchors for this city and they deserve to be the best in the world,” Biden said.

Last October, the two talked about plans to improve the region’s airports and announced a design competition for LGA’s central terminal.

Delta has already taken the first steps in modernizing LGA by investing nearly $260 million at Terminals C and D since 2012.