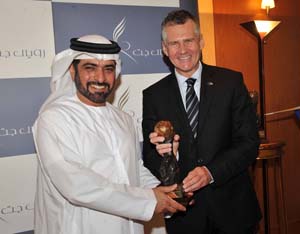 Commenting on the award, Royal Jet’s CEO and President, Shane O’Hare said: “Royal Jet attributes such success to the vision and leadership of our chairman, H.E. Sheikh Hamdan and our esteemed board members. Since the company’s inception, Royal Jet has remained a profitable business and is widely regarded as a growing success; this is reflected both in such awards and year-on-year growth.”

It is constantly improving its customer experience, and is currently refurbishing its five Boeing Business Jets. Royal Jet has also recently launched a ‘world-first’ by becoming the only private jet charter company to offer its guests a personal chef, providing them with bespoke gourmet dining based on their own individual preferences.
——-