Travel industry’s top players let their hair down in St. Lucia for the closing party of Caribbean Marketplace 2009.

The spirits were both high and well deserved with record booth numbers, along with fresh hopes and initiatives for ways to propel the Caribbean through the global downturn. 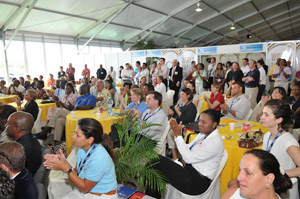 (Above: a packed house at Caribbean Marketplace 2009)

The number of booths totalled 406, the first time in a decade it exceeded the 400 mark. The 12,292 scheduled appointments were second in number to the record set last year, indicating that interest in meetings between suppliers and buyers remains strong. 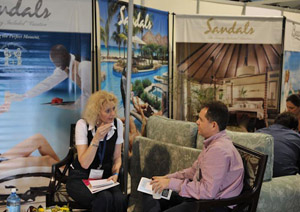 (Above: Business as usual at Sandals)

Some 1,366 delegates attended, including 871 supplier delegates to meet with 298 buyers from 124 partner wholesale tour operator companies from more than 20 countries worldwide. 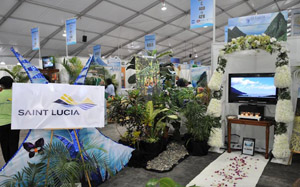 This compares favourably to last year when there were 908 supplier delegates. However the number of buyer companies decreased as consolidation in the industry continues to shrink the number of wholesalers worldwide. 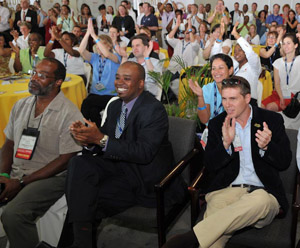 Meetings stopped when Barack Obama delivered his inauguration speech and the crowd went silent, mesmerized by his hope and vision of a new world, before erupting into applause.

With the arrival of night, Gros Islet, one of the venues for the hugely popular St. Lucia Jazz Festival, transformed in a carnival paradise. St. Lucian soca sensation Ricky T kicked off the closing party with a set that proved just why he’s scored mega hits right across the Caribbean. 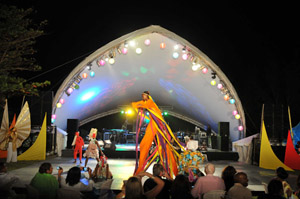 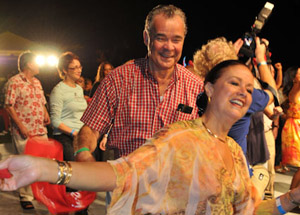 (Above: Alec Sanguinetti, CEO and Director General for CHTA, gets down to the beat)

Machal Montano, the Bob Marley of Trinidad, whipped the crowd into a frenzy. His set, on the evening of Barack Obama’s inauguration, included 10-foots Obama puppets dancing on stage with him. The crowd went wild. 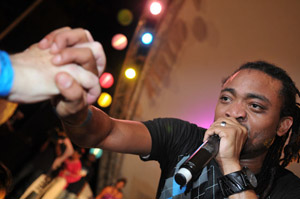 Senator Allen Chastanet (pictured below), St.Lucia Minister for Tourism & Civil Aviation, came on stage to extend a huge thank you for making Caribbean Marketplace 2009 such a shining light and arena of hope and opportunity in a world of economic turmoil. 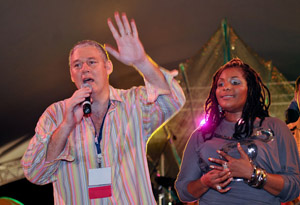