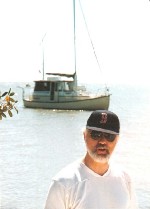 In recognition of his pioneering role in marine conservation and invaluable contributions to tourism in Bonaire, Captain Don Stewart, the “founder” of the dive industry in Bonaire, will be inducted into the International Scuba Diving Hall of Fame on October 12, 2005.
Captain Don, who grew up on the water in California, has spent the greater part of his life in Bonaire taking visitors diving and successfully campaigning to protect the natural wonders that he “discovered” when he landed on the island.

Among his many accomplishments, Captain Don lead the campaign to ban spearfishing on Bonaire, instituted the first permanent mooring system, eliminating the need to drop anchor, founded the Council of Underwater Resort Operators of Bonaire (CURO), which has united
the underwater operators of the Caribbean, and implemented a mandatory orientation dive for all people diving on Bonaire.

The International Scuba Diving Hall of Fame was founded in 2000 by the
Ministry of Tourism of the Cayman Islands.
——-