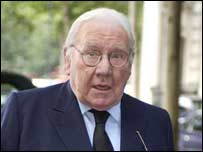 British Airways’ chairman Martin Broughton paid tribute to Lord King of Wartnaby, the airline’s chairman from 1981 to 1993, on the announcement of his death this week.
“Lord King was a dynamic, inspiring and formidable figure who led our company through one of the greatest periods of change in its history.

“He transformed the airline from a position of state-owned weakness to one of financial strength and global renown as a pioneer privatised carrier.

“He was chairman of the airline from 1981 to 1993 during which time we became a private company.

“In1993 he was appointed president and then in 1997 given the honour of being president emeritus.

“He will be sorely missed by all of us who were privileged to work with him and knew him as a friend, colleague and leader.”
——-