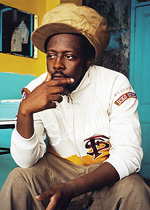 “The St. Kitts Music Festival has grown into something of a phenomenon, drawing visitors from across the Caribbean as well as from North America and across the globe,” said Hon. Richard “Ricky” O. Skerritt, Minister of State in the Ministry of Tourism, Sports and Culture for St. Kitts.

“Not only is it a wonderful cultural event, it also has a significant positive impact on the tourism sector of our economy as hotels, restaurants, taxis and other business entities see increased business as a direct result of the Music Festival.”
——-