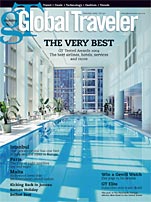 The results of Global Traveler’s
annual reader survey are published in the magazine’s January 2005 issue.
The survey reveals readers’ picks for the best in business and luxury
travel in categories ranging from Best Airport in the World, Best Airline
in the World and Best Frequent Flyer Program. GT’s reader survey ran in
the March and May 2004 issues of the magazine and also on GT’s web portal
- http://www.globaltravelerusa.com/. “Global Traveler readers embody the best of business and luxury
travelers,” said GT Publisher and CEO Francis X. Gallagher. “No magazine
readership is more qualified to vote in these categories. Our readers are
individuals who take more flights and stay in more hotels than any other
segment of the population.”

“People who fly a lot for business and pleasure rack up an enormous number
points and miles,” said Gallagher. “Points for this segment of the
population are not a novelty; they’re a commodity.”

“If you fly for a living, you find that service rules,” said Alexandra
Young, GT Vice President. “A friendly smile and attentive service goes a
long way with premium travelers.”

“Chicago O’Hare operates like a well-oiled machine,” said Richard Evans,
GT Vice President. “Passengers are transported efficiently. This ‘winged
city’ is a destination in itself.”

Readers also gave a nod to Westin Hotels & Resorts, with its attention to
detail and much-loved signature “Heavenly Beds,” naming it the Best Hotel
Chain in the United States.

Global Traveler is the only successful U.S.-owned magazine serving the
business/luxury traveler. Distributed nationally, Global Traveler has an
ABC paid circulation of 60,232.
——-