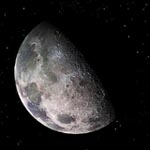 Have you ever dreamed of flying to the Moon? That would certainly account for a rather worthwhile and ‘out of this world’ holiday wouldn’t it? That dream may not be such a distant ideal any longer as today Michael R. Henderson, Chairman, RJH Holdings and Creator of MOON announced the chosen location for MOON, penned to be the world’s largest most spectacular and most expensive resort and real estate development.
MOON Bahamas will be built in the azure waters off the Northern Shore of Grand Bahama Island. RJH Holdings has entered into a Memorandum of Understanding with The Grand Bahama Port Authority. MOON Bahamas, will be completed in 2010.
“Henderson and his team have created a concept which is ambitious, bold and unique. In a world full of mediocrity it is rare to find a project which captures the imagination in a way that MOON does. We are delighted that the MOON Team has selected Grand Bahama as the location for this magnificent development. Located just 65 miles from Palm Beach, with crystal clear waters and superb infrastructure, we believe that Grand Bahama Island is the ideal location for a project of this magnitude. This project is presently being reviewed by the Government of the Bahamas and subject to the necessary approvals being granted, we look forward to working closely with the MOON Team to make this project a reality,” said Edward St-George, Chairman, Grand Bahama Port Authority, Ltd.
“Having spent a considerable investment in both time and capital today is a landmark for the project and I am truly delighted to finally announce MOON Bahamas. I would like to thank all our global partners who collectively have helped to make this day a reality. In particular I would like to thank the following companies for their superb contribution, Leach Entertainment Inc - Las Vegas, USA, Van Oord NV - Rotterdam, The Netherlands’s, Hill International - Athens, Greece and Edwin H. McMullen & Associates - Orlando, USA. A special thank you is extended to Wirth Associates - Nassau, The Bahamas for their persistence and vision. All of us on the MOON team look forward to project completion in 2010,” said Michael R. Henderson, Chairman, RJH Holdings and Creator MOON.

“Travelling 14 times around the globe, considering many wonderful locations for MOON, I am simply thrilled with our final choice. Spending time in the spectacular waters of Grand Bahama with its friendly people, its unrivaled proximity to the United States and its phenomenal, virtually untapped, tourism and vacation home potential, one realises MOON belongs in Grand Bahama Island,” said Sandra G. Matthews, Managing Director, RJH Holdings.
——-