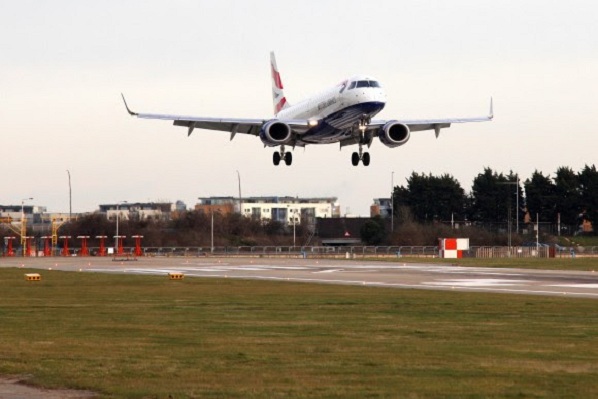 A British Airways A319 lands at London City Airport

British Airways has released a cockpit video showing the steep approach into London City Airport to celebrate the airline’s bespoke business-class only service completing 25 million miles – the equivalent to 100 trips to the moon or circling the earth 1,000 times.

The footage, filmed from the pilots’ perspective in the flight deck, now gives everyone the chance to see the amazing aerial views of the capital’s iconic skyline.

The airline began flying its twice-daily Club World only service between London City Airport and New York JFK with two A318 aircraft in September 2009, and this month it will have flown 25 million miles since its launch.

During its final approach into London City Airport the view from the flight deck affords unique views of several of London’s most recognised sights, including the London Eye, The Shard and Tower Bridge – previously only enjoyed by the airline’s pilots.

The video shows British Airways captain Karen Atherton and senior first officer Paul Riglar at the controls of one of the airline’s specially modified A318 aircraft which enable it to perform the special steep approach required at London City Airport, one of the most challenging landings of any of the carrier’s 190 plus worldwide destinations.

Captain Karen Atherton is one of only 27 British Airways Captains qualified to carry out this challenging landing.

Only very experienced Airbus pilots at the airline can apply to fly on the route, and all must pass a rigorous extra training programme, involving simulator testing and route flying, before being accepted into the fleet.

Atherton said: “The views flying into London are breath-taking, and are a constant reminder of what an incredibly beautiful city it really is.

“The level of training required is demanding, and rightly so, but the flying is extremely rewarding.

“I have one of the best commutes home in the world, and it’s great to be able to share the experience with our customers with this video.”

The airline’s Club World-only A318 London City service delivers customers into the heart of the capital’s financial district, meaning they can be in the City within 30 minutes of landing.

The bespoke British Airways transatlantic service is the only long-haul flight at London City Airport.

Due to the airport’s proximity to Central London, and because of its slightly shorter runway, the A318 aircraft is specially modified to allow it to fly this approach, using spoilers on the wing to produce enough aerodynamic drag to maintain the approach speed.

British Airways was the first airline in the world to take delivery of the specially modified A318 with steep approach capability and the carrier’s pilots have a specific, additional training certification to fly there.