Heston Blumenthal, Richard E Grant and Tracey Emin have unveiled projects inspired by the London 2012 Olympic Games, produced by rising British talent who they mentored over the past year in the British Airways Great Britons Programme.

Tens of thousands of customers travelling to Europe over the next year will have the chance to fly on one of nine celebratory ‘Dove’ aircrafts, created by artist-designer Pascal Anson from Brighton.

His design is all encompassing of the livery, using the cockpit for its beak, fuselage and wings for its main body and wings, and the tailfin as its tail.

The aircraft will be painted white with gold strokes of paint to represent the feathers.

Doves are internationally recognised as a symbol of peace and social unity, and were also used in previous Olympic Games ceremonies, including the last London Games in 1948.

BA Great Britons mentor, Tracey Emin, said: “The first time I saw Pascal’s design it made me smile. The plane is universal. Everyone will understand it.

“I like the way it brings back the excitement of travel too. I will constantly be looking up every time I hear a plane fly over – you never know, maybe I will turn into a plane spotter!” 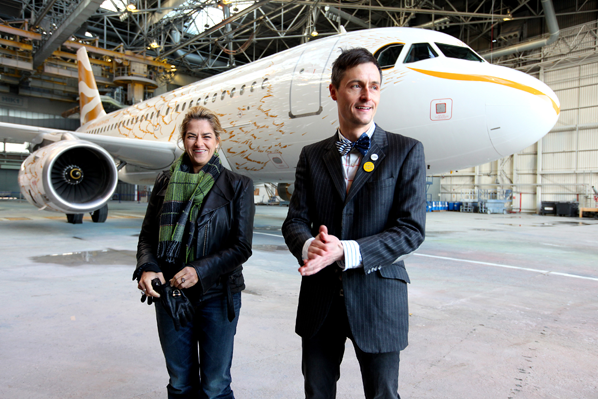 In the food category, Simon’s menu reflects Blumenthal’s creative approach by taking inspiration from the airline’s menus dating back to 1948 – the last time the Games were held in London.

Many of the original dishes have been reinvented for a modern day audience using ingredients rich in umami – otherwise known as the fifth taste, as well as locally sourced produce.

Working with Heston and his experimental team, Simon researched food in post war Britain, as well as the 1948 airline menus and discovered that indigenous and plentiful foods such as cuts of beef and fish played an important part of people’s diet during these austerity years. 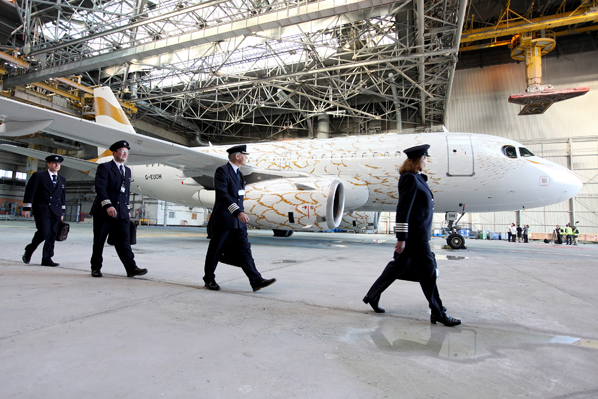 Finally, premiering on board flights from today is short film ‘BOY’ written by scriptwriter Prasanna Puwanarajah from London, who was mentored by actor and director Richard E Grant.

The nine-minute film is a story about a carpenter (played by Timothy Spall), who maintains the track at the Velodrome in the London Olympic Park.

The imminence of the Games forces him to deal with the loss of his son, a track cyclist. The bold and moving story takes you on a journey of loss, grief and triumph.

The making of the film will also be shown at the pre-opening of the Olympic Games Opening Ceremony.

A trailer of the film can be viewed here.

Grant said: “Prasanna’s moving story has materialised into a beautiful piece of work that is every bit as impactful as his script.

“The beauty about ‘BOY’ is that millions of people from all over the world will understand it, because there are no barriers with silent films, and Timothy Spall is utterly superb.

“It is a touching film that incorporates the London 2012 Games in a wonderful way.”

The BA Great Britons programme was launched last year to find rising British stars in food, film and art and provide them with career defining opportunities and a global platform to showcase their work in the run up to the Games.

The journey of the Great Britons has been documented and will be shown exclusively on British Airways flights over the summer.

To celebrate the launch of the Great Britons projects, the airline is launching an exclusive airline themed pop-up venue - ‘Flight BA2012’, celebrating the best in British talent in the run up to the London 2012 Olympic and Paralympic Games.