Two major cruise liners have made their maiden voyages to Abu Dhabi boosting hopes the emirate will achieve its target of receiving 77 calls from ships in the current 2011/2012 season.

Arriving in Mina Zayed earlier was the AIDABlu (pictured above), which belongs to the German cruise line AIDA Cruises, while the Costa Favalosa is expected later today.

With 600 crew and a passenger capacity of 2,500, the AIDABlu stopover in the UAE capital was part of an Arabian Gulf itinerary which begins and ends in Dubai but also takes in Muscat in Oman and Khalifa Bin Salman port in Bahrain.

The ship, which boasts six restaurants, ten bars, a theatre and one of the largest wellness centres of any cruise liner, was welcomed into Mina Zayed by a group of traditional Ayala dancers commissioned by Abu Dhabi Tourism Authority (ADTA).

Abu Dhabi Tourism Authority is considered the World’s Leading Tourist Board by the World Travel Awards. 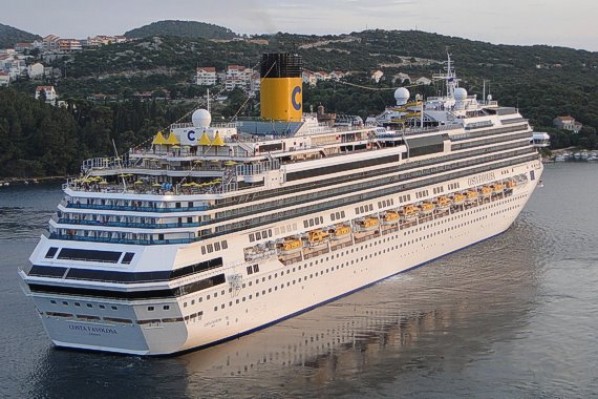 Mina Zayed will today welcome, for the first time, the Costa Favalosa, with a complement of 1,100 crew and a 3,500 passenger capacity.

This latest flagship of the Italian-flagged Costa Cruises fleet is billed as “the most advanced” liner ever deployed in the Middle East.

It is expected to clock up approximately 233,000 passenger movements during 22 UAE port calls before the end of its Arabian Gulf voyages on April 6th.

Deployed regionally for the first time this winter, Costa Favolosa offers seven-night cruise packages that encompass two days in Dubai, as well as one-day stopovers in Muscat and Khasab in Oman and Abu Dhabi and Fujairah in the Emirates.

ADTA has a strategic commitment to the expansion of cruise tourism in Abu Dhabi and major operators with larger ships are a key component of this.

Its cruise ambitions were recently given a further boost with news from MSC Cruises, which is currently home-porting its MSC Lirica in Abu Dhabi – the first liner to be home ported in the UAE capital – that in the 2012/2013 season it will deploy its even larger, 867-cabin MSC Opera in Abu Dhabi.

The strategic repositioning of MS Opera, which is due to sail 25 week-long cruises in the 2012/2013 season will add a further 13,000 passengers to the 41,000 cruise arrivals MSC Lirica is expected to bring to Abu Dhabi this season.