As you enter through the imposing gates of Round Hill Hotel and Villas just a 30 minute drive out of Montego Bay you are immediately impressed with the sweeping grounds of this magnificent estate.
Driving along John Pringle drive you get a sense of the greatness of the man that had the vision and drive to create this amazing resort.

John Pringle had one goal in mind to reinvent the boutique hotel forever, and that he did. Raised with hospitality in his veins as soon as he set his eyes on the Round Hill peninsula he was quoted as saying, “ it was one the loveliest views he had ever seen” and he wasn’t wrong, its simply breathtaking.

Mile after mile of Jamaica’s incredible coastline with hills rising several hundred feet out of the clear waters of the Caribbean sea. As they faced west, and the sun began to set, everything was touched with a pink glow, paradise found! 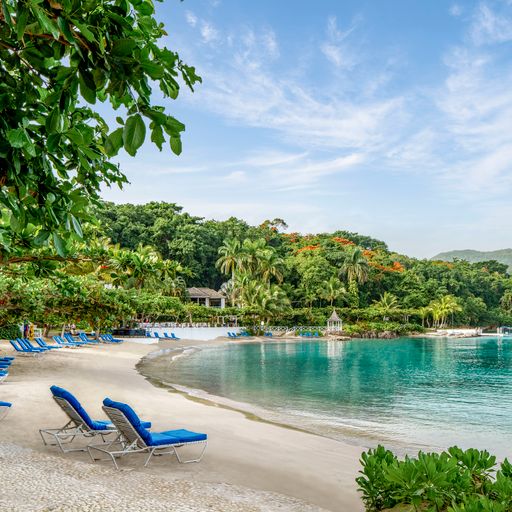 John Pringle imagined a resort composed entirely of resort cottages, each one owned by a prominent shareholder with a desire to own a property in the right area and location in Jamaica without the worry of remote ownership and care.

And so, Round Hill was born, opened in 1953 with Noel Coward as its first shareholder. Following this word soon spread, prominent American and European figures, literati and artists joined as shareholders. John Pringle had created something magical, something quite exceptional and people were just beginning to see that; they too began building their own luxury retreats.

The great man served as Jamaica’s first Director of Tourism, between 1963 and 1967 and was rightly credited for putting Jamaica on the global tourism map.

On January 8, 1954 some 200 guests attended a “pre-house warming party” given by Noel Coward, one of the shareholders. On January 21st, Round Hill opened for business with 18 cottage owners (more like large villas)

The excellent Spa and surrounding grounds were added in 2001 adding 10 further beachfront acres to the property. 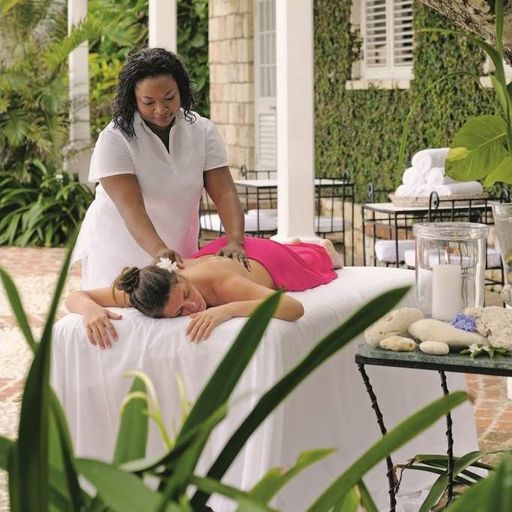 In 2003 at a small but intimate group of family members and dignitaries attended a ceremony held primarily to rename Round Hill Drive - the main driveway leading unto the property as the ‘John Pringle Drive, fitting indeed.

Josef Forstmayr, the Managing Director of Round Hill, said at the time there was an overwhelming demand from staff that something should be named in his honour. He said it was an instant desire of staff and shareholders.

In 2008, the hotel had 110 acres, with 36 rooms in the Pineapple House Hotel (designed by Ralph Lauren), and 26 individually owned villas with suites 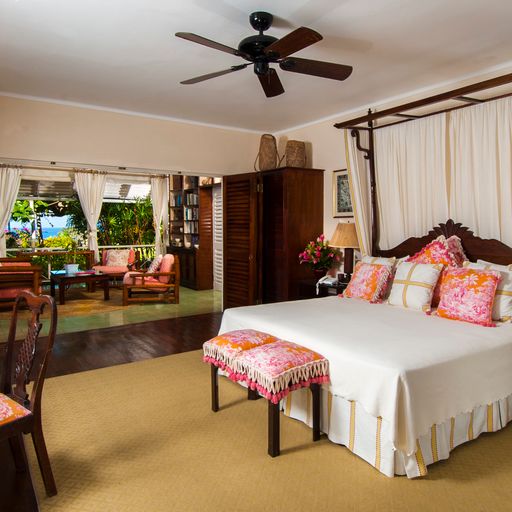 The resorts magnificent Spa housed in a restored 18th century home today houses a luxurious collection of treatment rooms awaiting visitors and offering an experience like no other, the most modern spa treatments are available and carried out by the very best trained staff in surroundings that can only be described as heavenly and which sets this apart from other spas in Jamaica.

Under Mr Forstmayr’s steady hand, he joined Round Hill as MD in 1989, the hotel and its exquisite villas are in safe hands, at the time of writing this I understand a new villa is under construction and will be ready early next year, the first new villa for six years, which will, I am sure, be something very special indeed.
The resort has won nearly every accolade there is going over many years, it is the recipient of World’s Best Villa, Caribbean’s Best Villa Resort, and this year, Jamaica’s Leading Hotel from the World Travel Awards.
Roundhill was voted World’s Leading Villa Resort at the recently held World Travel Awards 2022 - https://www.worldtravelawards.com/profile-2145-round-hill-hotel-villas 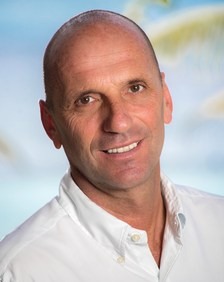 Mr Forstmayer too has won his won share of awards , he is a hotelier through and through, a perfectionist and it’s easy to see why the resort is the success it is today.

Mr Forstmayer is also a recipient of membership in the Order of Distinction in the Rank of Office from the Government of Jamaica for his contribution to the island’s tourism industry.

In March of this year the Austrian government bestowed one of the highest orders any civilian can receive from that European country’s president to Josef Forstmayr, Managing Director of the Round Hill Hotel and Villas. The Jamaican naturalised Austrian-born general consul received the Great Medal of Merit of the Austrian Republic via Austria’s newly minted ambassador to Jamaica, Sylvia Meier-Kajbic, at an intimate cocktail reception at his beloved resort.

But what of Round Hill, what makes this resort so special?

In a word “class”, it oozes class from the moment you drive through the gates, the manicured grounds as you drive down John Pringle Drive to reception are simply amazing. So much work clearly goes on behind the scenes keeping the grounds manicured throughout all seasons by its incredible grounds staff and boy is it worth it!
When you do arrive at reception, a reception that hasn’t changed since the resort opened in 1953, a team of staff jumps to ensure you are greeted well and that everything is taken care of efficiently and effortlessly. The reception is charming, welcoming and totally functional but with real class and in a fabulous colonial style. 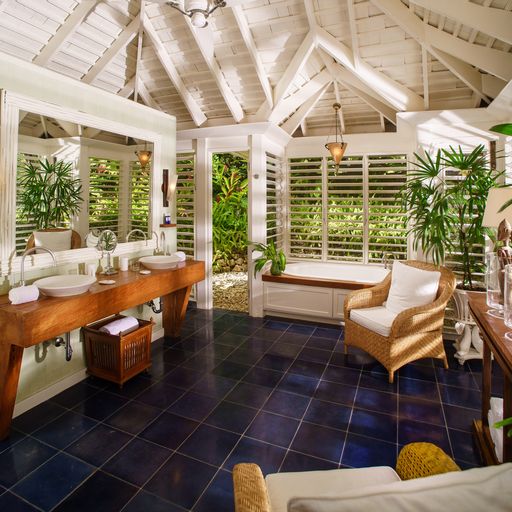 The villas, the real highlight of the resort are incredible, each a work of art, the design, the setting, each one unique in its own way are truly a sight to behold. Each villa has its own house team to cater for the needs of every guest. You could not want for more, all your needs are more than catered for and in such style.

A real treat is the resorts in villa dining experience; guests are exclusively catered for by their own highly trained staff, luxury doesn’t come any better than this.

The resorts amazing staff are so proud to work here; many that I spoke with have been here for decades, and some are third generation family members that wouldn’t dream of working anywhere else.
As for the service standards at this resort, it doesn’t get any better, super attentive polite staff, immaculately turned out and clearly well trained. You get exactly what you want, when you want it and where you want it, within reason, and all with a true Jamaican smile.
You simply couldn’t ask for anything more, the management team have created a work ethic that has to be the envy of the Caribbean.

My room in the hotel was on the ground floor, everything you could want was there, a comfortable large bed, cozy sitting area, a balcony and a large and wonderful bathroom with a huge bath and a perfect shower, and of course great Wi-Fi, a must in todays market.
A lovely touch was the room came equipped with a wonderful beach bag barbed with Round Hill which my wife loved in addition two reusable water bottles. This is a great idea, instead of asking the staff for bottled water and an endless supply of plastic bottles heading to a recycling center, (one would hope) you just ask the bar staff to top this up when needed or use the water dispensers that were sited around the resort. Green thinking executed well. 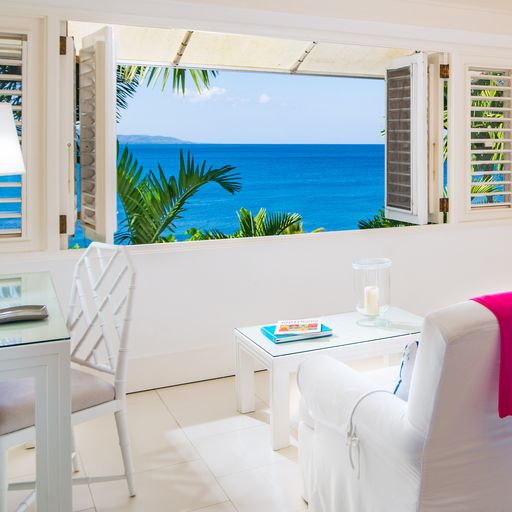 Breakfast is a very simple affair, a good menu in an excellent environment stylishly done. Lunch too is normally served on the restaurant terrace from a wide-ranging menu with a great choice of main meals or snacks. You cannot fault the quality of the dishes that come out the kitchen and all presented well. Nothing is rushed and nor should it be, the staff know this only too well.

Dinner is an entirely different affair, as befitting a resort with class and style a no shorts policy exists which is absolutely right. Lights surround the restaurant areas providing a warm inviting and romantic setting; you dine under a canopy of stars.
Music is played nightly and during the week there are themed evenings. My favorite was the beach BBQ, tables set on the beach torches alight everywhere and food stations serving all manner of amazing dishes. Clearly this is a night to unwind, shorts and flip-flops are the order of the evening and everyone seems to love it. 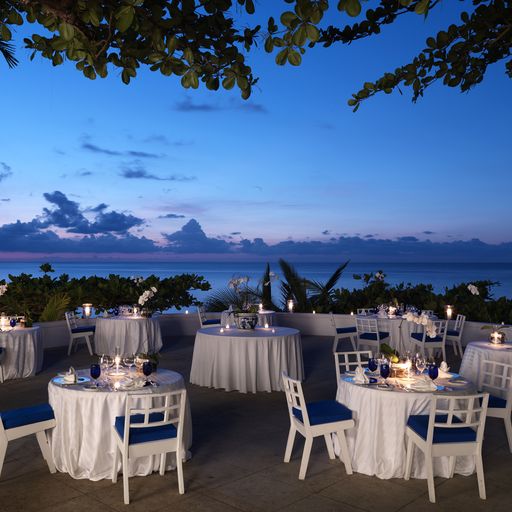 The restaurant manager, Mark Parchment, was fabulous, he appeared to know everyone’s name or at least made an effort to; his amazing staff under his close guidance did their very best to ensure that everyone got seated at a typically Round Hill pace, and they then received the typical Round Hill service, no one felt rushed or uncared for, an army of waiters who all had their own individual roles looked after every table in a totally coordinated way, it was an experience I enjoyed and enjoyed watching, quite an act. 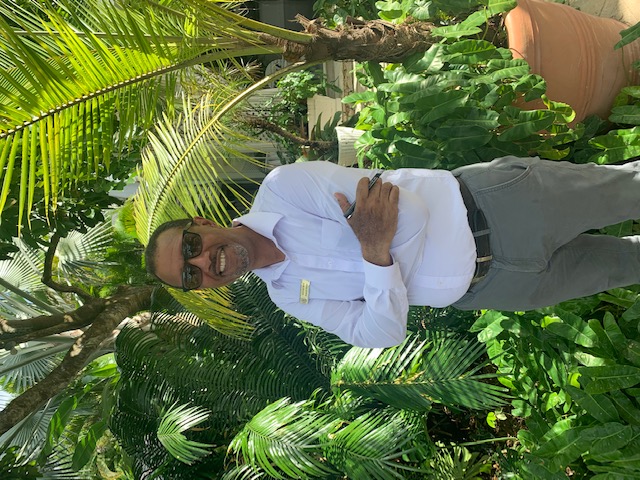 The infinity pool and the beach are where you will find most of the guests during the day, soaking up the Jamaican sunshine, chilling in the shade or enjoying cold drinks and cocktails at the two beach bars. The staff that are responsible for the beach and pool do their very best to ensure that fresh towels are ready when you want them, drinks are chilled the way you like and nothing is too much trouble 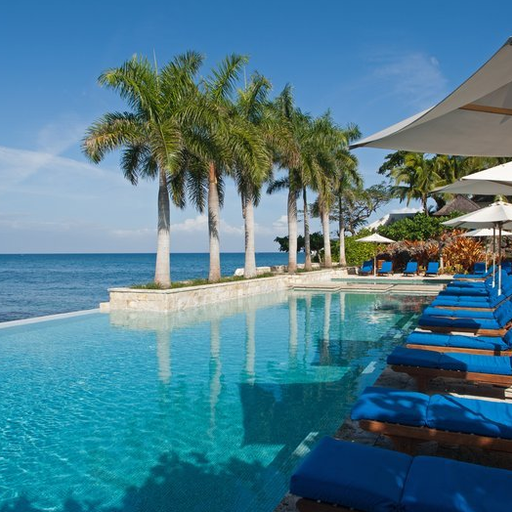 Round Hill have a team, which must surely be the envy of the Caribbean, years of experience shows in every area of the resort. With great food, stunning grounds, impeccable rooms and staff that really do want you to have a great stay and want you to come back year after year, and so many in fact do. I met one family that had been coming back for the last thirty years; another couple were on their fourth short break of this year already. The returning guest rate is high at 70% but it’s easy to understand why once you have stayed at Round Hill and enjoyed the Round Hill experience.

So there you have it, a resort that works hard to ensure each and every guest has a vacation like no other; the vision of a great man, John Pringle in 1953 to build and reinvent the boutique hotel obviously worked, and it worked spectacularly.

Today under the leadership of its supremely proud and hugely capable Managing Director Josef Forstmayr the hotel is not only thriving, not only succeeding, but is still setting trends, setting the bar high, so high in fact that others will find it almost impossible to match what has been created here - A TRUE PARADISE!

You can experience a 3D Virtual Tour of Villa 20 and 84B here https://www.virtualworldinternet.com/portfolio/round-hill-jamaica