When Mardan Palace opened in 2009 even the most hardened critics admitted it was something special, something new, not just for the Turkish resort of Antalya, but for the global tourism marketplace.

Even the prestigious World Travel Awards – among the most sought after honours in the whole industry – selected the property as the World’s Leading Luxury Hotel just a year after it was opened.

But few realised just how much potential Mardan had.

In just a few short months the hotel – which cost over $1 billion to build – has come to defined luxury accommodation, echoing the great lodgings of the Ottoman Empire – an era when hospitality was without compromise and decadence abound.

This was made clear earlier this week when Enbe Band – among the most sought after acts in the Mediterranean – took to the stage to wow guests with a two hour set. 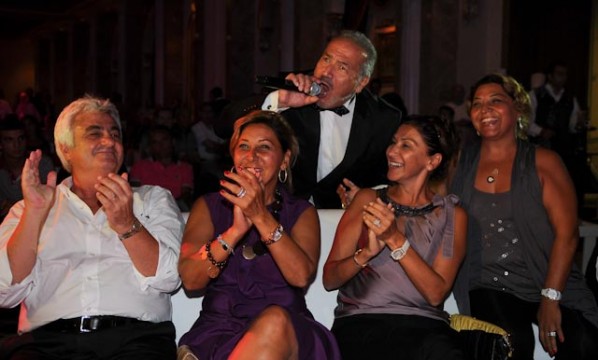 Founded in 1993 under the leadership of members of the Behzat Gerçeker, the group contains many of the leading lights of the Turkish music industry.

But acts of this quality are typical of Mardan Palace, which has grown to a virtually unassailable position atop the luxury tourism sector.

Mardan is the vision of Telman Ismailov, chairman of the biggest property developer in Russia, AST, who fell in love with the Antalya region following a visit.

In honour of his father, whom the resort is named after, he built Mardan on the sun-kissed Turkish Riviera surrounded by the dramatic Taurus Mountain range.

The signs were clear early on this would be something special.

Echoes of the Past

The resort captures the opulence and wonders of the Ottoman Empire, and serves as homage to its enchanting past.

Gondolas sail guests around the Mediterranean’s largest swimming pool, five giant aquariums reflect the Earth’s oceans in the restaurants and spa, a swimming reef provides an aquatic haven to explore, a dramatic amphitheatre seating 900 will hosts world-class entertainment and spectacular light shows are set to adorn the night skies. 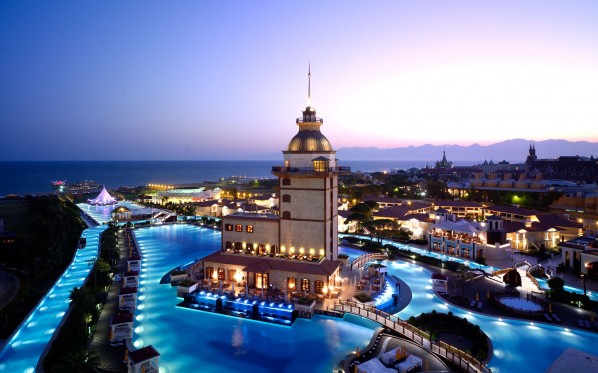 Maiden Tower, here seen at night, as among the focal points of the property

The 546 rooms are exquisite and include two Royal Suites complete with private pools.

With Turkish heritage in mind, the architecture reflects the distinctive landmarks of Istanbul – the main hotel resembles ‘The Dolmabahce Palace’ and bridges across the pool are based on original designs of the ‘Da Vinci Bridge’.

So even with the Enbe Band performance is over, there is still a wealth of entertainment on offer at this most endearing of properties.

Those seeking to reach the resort can employ the services of World.Mobi, which recently launched its guide to the Antalya region.

The flourishing region has been transformed into the country’s main holiday resort, complete with palm-lined boulevards, glitzy marina and a summer home for affluent Germans and British residents.

City.Mobi offers the most comprehensive mobile travel guides available, with over 800 cities in 200 countries listed.

Each is developed by the City.Mobi team to combine into a single global travel directory.