Corinthia Hotel Budapest is considered an icon of the city

Away from the crowds of Prague and the ossified air of Vienna, Budapest is still somewhat of an undiscovered gem to many western European travellers.

Not yet overrun with British stag parties, the Hungarian capital is bursting with exciting opportunity, on a par with Berlin in terms of nightlife, and packed with countless historic sites on which to gorge the intellect.

With the forint relatively weak against the euro or pound, it is also tremendously affordable, making a visit all the more desirable.

Splitting the centre of the city is the Danube, the mighty river which snakes its way for countless miles across central Europe, originating in Germany’s Black Forest before emptying into Black Sea on the southern border of Ukraine.

Plied by countless river tours, the waterway is in Budapest flanked by the magnificent Buda Castle and the wider Castle District.

Though Castle Hill has been constantly modified since it was originated in the 13th century, its main streets still follow their medieval paths.

Some houses date back to the 14th and 15th centuries, while the Fishermen’s Bastion, Matthias Church and Hungarian National Gallery (situated in Buda Castle itself) are sights to rival those anywhere in Europe.

Down below, the famous Chain Bridge spans the wide expanse of the river, while the picturesque funicular quietly ferries guests up and down the steep cliffs.

In the centre of town the warm waters of the famous Széchenyi Thermal Bath welcome guests whatever the season, while the Terror Háza Múzeum offers a chance to reflect, tracing the history of both the Nazi and Soviet occupations of Budapest.

At night the ‘ruin bars’ in the centre of town – including Szimpla Kert and Instant - come alive, presenting the intrepid with a chance to indulge everything from burlesque and techno, to alfresco dining and much else besides.

Visiting, it is clear Budapest is full of secrets to uncover, hidden spots to explore and old favourites to revisit.

A city where being bored is not an option. 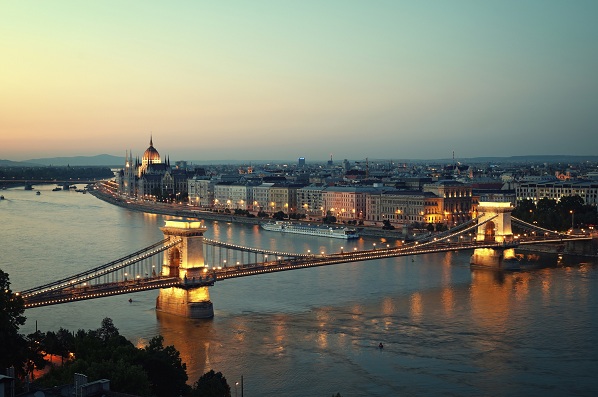 The Chain Bridge is the star of Budapest tourism

But where to stay?

For many it is impossible to look past the Corinthia Hotel Budapest, a location which has been at the very centre of the city for generations.

The largest hotel in Budapest, it was occupied by both the invading Wehrmacht and Red Army during World War II illustrating its vital importance to the city.

While it has no star rating (in order to meet criteria baring business travellers from five-star stays) it is clearly a top-draw, luxurious property.

While, at the same time, the levels of comfort and convenience are thoroughly modern.

Its 439 rooms, 31 suites and 26 serviced apartments are considered among the best in the city, leading to occupancy rates upward of 78 per cent last year.

A fine welcome from Corinthia Budapest

These luxury accommodations will be the newest in Budapest and will offer a remarkable combination of new, fresh, spacious and elegant interiors.

From the new lighting touches to the harmonic mix of materials and furniture, the reborn suites evoke a decidedly “home away from home” feel for their sophisticated clientele.

“The overall feel of these suites will be one of 21st century elegance combined with the modern touches of luxury that one would expect of five star hotels,” explains Jean Pierre Mifsud, general manager of the hotel.

“We wanted to tip a hat to the rich, historic feel of the Corinthia Hotel Budapest, but ensure that the new suites also have a contemporary feel.

“Our goal was to give guests the sense that while they are walking into a modern setting, they quickly understand that this is a timeless design.‟

At the same time, the hotel’s original nineteenth-century spa has been restored to reflect its former grandeur, while simultaneously offering ESPA’s cutting-edge treatments and technologies.

The renovated spa at Corinthia Budapest

Another new addition, the Royal Salon, has also recently opened aimed at organisers of MICE events.

It is furnished in club style, has offices, boardrooms and rest sections, all fitted with 21st century equipment in order to facilitate daily work and ensure the necessary comforts for relaxation.

Clients can be received and negotiations conducted in private in the meeting rooms which are fully equipped with digital technology and smart screens.

The office of the Corinthia Hotel Budapest Event Team is also located near the lounge area, thus ensuring that they are always on hand and can be reached quickly and easily.

“We are confident that with the inauguration of the Royal Salon we will be providing our Meetings, Incentives, Conferences and Events organising partners with a unique added value, guaranteeing them every condition necessary so that they can carry out their work without interruption and in comfort.

“This will, further enhance efficiencies by excluding all distractions and by ensuring that our team is constantly at their disposal.

“We trust that with this new development the Corinthia Hotel Budapest will be the venue of many successful events in the future,” concludes Pierre Mifsud.

First opened in 1896 as the Grand Hotel Royal, the Corinthia Hotel Budapest remains one of the grandest hotels in the city.

This impressive landmark, with an imposing Neo-classical façade and soaring six-storey glass atrium, was meticulously renovated in 2003, following its acquisition by Corinthia Hotels.