When it comes to tourism, Ecuador is nothing if not ambitious.

Under the leadership of recently re-elected president Rafael Correa, the sector has been declared of strategic national importance, with money flowing in.

The All You Need Is Ecuador campaign has been launched, taking the destination into new markets while also seeking to the showcase what is on offer outside of the famous Galapagos Islands.

Under the stewardship of tourism minister Sandra Naranjo, too, the government is investing in infrastructure and developing attractions.

In 2013, it announced a plan to invest US$660 million by 2017 in sites in the Amazon rainforest and the Andes, while also establishing new regulations to support tourism professionals such as hoteliers and tour operators to expand their operations. 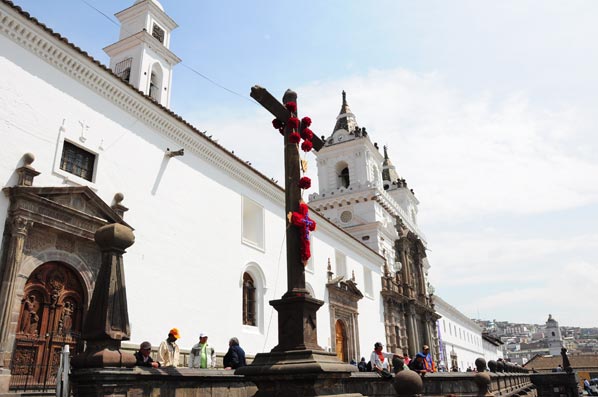 This focus seems to be working, with the opening of the new Mariscal Sucre International Airport in Quito one early example.

Figures from the World Travel & Tourism Council reveal tourism contributed US$4.7 billion to Ecuador’s GDP in 2013, with this figure expected to rise by 4.5 per cent per annum to US$7.6 billion, or 5.8 per cent of GDP, by 2024.

This is behind only primary exports - including oil, bananas, seafood and flowers - in importance for the economy, making tourism the most significant service sector.

Moreover, 4.8 per cent of total employment in Ecuador, or 337,500 jobs, was supported by tourism last year.

One of the main beneficiaries of this focus on tourism has been the capital Quito, which saw a total of 609,277 tourists visiting in 2013, a 14 per cent increase on the previous year.

The city has also recently been recognised as South America’s Leading Destination by the World Travel Awards.

Here the historic Old Town, declared a World Heritage Site by UNESCO in 1978 and considered the largest and best preserved in South America, has been lovingly rejuvenated as part of a $70 million programme, with sights such as the Church of La Compañía de Jesús resorted to their former glory.

Hotels, including the luxurious Plaza Grand and Casa Gangotena, compete with those anywhere in the world, while the views over the city from Rumiloma are rivalled only by the exquisite cuisine.

Downtown the bustling entertainment district of La Ronda has ambitions to rival Las Ramblas in Barcelona, while Teleferico Quito takes visitors on a hair-raising journey into the foothills of the Pichincha Volcano and the lookout at Cruz Loma.

So, plenty to see in the city itself. 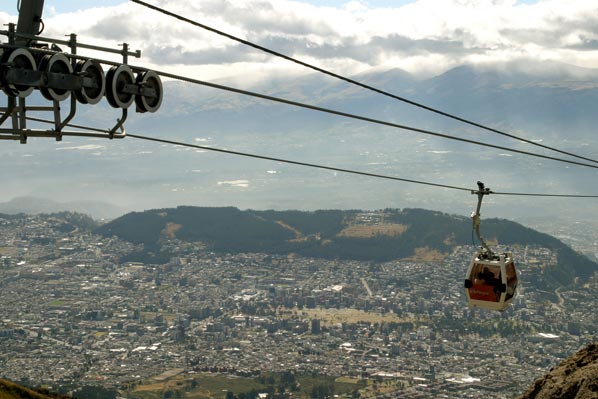 Views over the city of Quito from the Teleferico Quito

Hiking and biking trails in the Avenida de los Volcanes are popular, especially with German, Swiss and French visitors keen to check out these Alpine rivals, while trips to the equator also draw thousands.

Relaxing days in the hot springs of Papallacta will be familiar to those who have visited the Blue Lagoon in Reykjavik, while the newly renovated Tren Crucero offers four day tours into the hinterland of the city.

But despite this government support and wealth of attractions, problems remain for tourism in Quito, and Ecuador more generally.

The tourism sector heavily relies on domestic tourism, for example, with domestic expenditure valued at US$7.1 billion in 2013; as compared to US$1.3 billion in inbound expenditure.

With visas on arrival available to virtually all nationalities, this should change over time, but at present Ecuador relies heavily on its own people for tourism dollars. 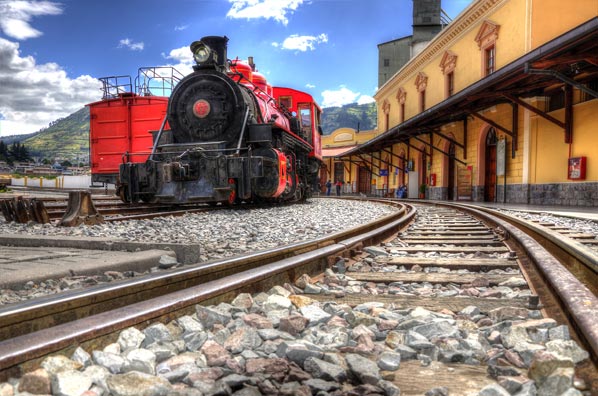 Tren Ecuador is the most glamorous way to explore the country

Infrastructure is also struggling to match the pace of expansion.

While the new Mariscal Sucre International Airport opened in February 2013, the key roads linking it to the centre of Quito will not be completed until the end of this year, leaving arriving tourists to endure a bumpy ride to their hotels.

With flag-carrier Tame Airlines expanding, this problem will continue until essential projects are completed.

Ecuadorians are, rightfully, proud of the highway network linking outlying parts of the country to the centre. But this too is a work in progress, with a 4X4 vehicle a virtual necessity the further the capital guests venture.

Cultural challenges loom on the horizon also if Ecuador is to continue to grow in tourism stature.

A staunchly Catholic country, Ecuador’s licensing laws see the sale of alcohol prohibited after midnight during the week and almost completely banned on Sundays.

Gambling, too, has also been recently outlawed following a popular referendum.

Similarly to Dubai, flexibility within these strict laws may have to be introduced to accommodate the demands of leisure visitors. 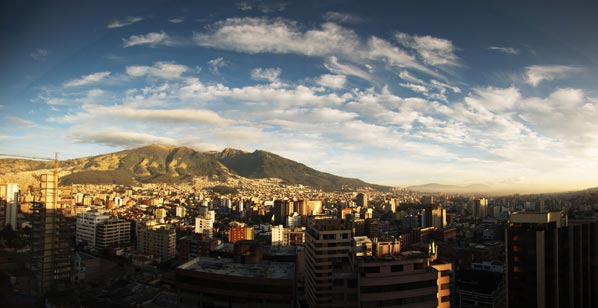 Quito has been recognised as South America’s Leading Destination

There is also a more general concern among Ecuadorians about how much mass tourism the country can accommodate.

After centuries under the yoke of Spanish colonists, there are now fears of American dominance.

On a practical level this translates to concerns as mundane as traffic jams in Quito Old Town during the morning rush hour, with streets virtually impassable, or the rise of English language cinema in local theatres.

There is also grumbling about the cost of the All You Need Is Ecuador campaign, with many questioning why the country’s oil revenue cannot be seen to trickle down into new schools, hospitals and security for the people. 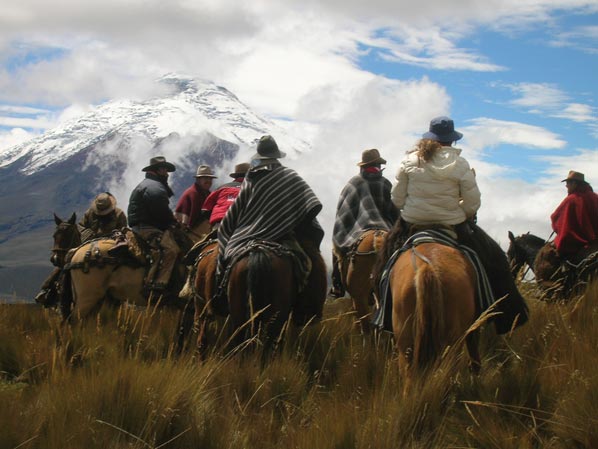 Quito is also a great base for exploring the Andes

More abstractly there are real fears Ecuador will lose its vital identity.

Guides point to the ‘Gringo Trail’ that leads to Machu Picchu in Peru, where the quiet contemplation of the citadel has been replaced by the bustling of tour buses on whistle-stop visits.

Fears abound the Galapagos Islands could be tainted in the same way, with the essential essence of the place jeopardised.

While the reaction is unlikely to be as dramatic as that of Bolivian president Evo Morales, who has suggested slaughtering all Spanish-descended horses in the country, the concerns are real enough.

Ambitious, certainly, and packed with potential, this could be a world beating destination, but will Quito be willing to pay the price of mass tourism?

More information on visiting the Ecuadorian capital Quito can be seen on the official website.